Josefa, the fashion designer credited with showcasing Mexican styles on the world haute couture stage, lived and worked for many years at Lake Chapala. She successfully melded indigenous Mexican colors and elements with functional design to produce elegant and original dresses and blouses. Josefa designs were never mass-produced but made by local women in small villages near Guadalajara. 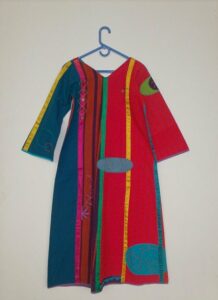 Josefa Ibarra and her business partner, Ana Villa, founded a brand known as El Aguila Descalza (The Barefoot Eagle). Based in Tlaquepaque, The Barefoot Eagle opened retail stores in several major Mexican cities and one in Boston, while simultaneously supplying numerous high-end department and fashion stores in the U.S. and elsewhere.

Josefa followed her own intuition as regards fashion and her success resulted from a series of serendipitous encounters. She was living in Puerto Vallarta when she got her first lucky break, which involved Elizabeth Taylor, in 1963. Taylor’s lover, Richard Burton, was there at the time because John Huston had chosen Puerto Vallarta, then just a small village, for filming The Night of the Iguana (which co-starred Ava Gardner).

One afternoon, in a break from filming, the cast and crew, accompanied by Taylor, were wandering around the village when, outside a typical small dwelling, they came across a selection of beautiful dresses hanging from the branches of a tree. The house belonged to Josefa, and the visitors bought every last one of her dresses. The famous actress subsequently added numerous Josefa designs to her wardrobe during repeated visits to Puerto Vallarta over the next decade.

Josefa’s second lucky break, shortly afterwards, was to meet Boston-born Ana Konstandin, when she was on vacation in Puerto Vallarta. (After Konstantin moved to Guadalajara to run The Barefoot Eagle, she married Edmondo Villa and changed her name to Ana Villa.)

Ana, who had graduated from the Academy Moderne of Fashion in Boston, had an eye for style and was a buyer for Filene’s Department Store in Boston. She also fell in love with Josefa’s designs and realized that this was a unique business opportunity. The two ladies got on really well together and had complementary skill sets. They founded El Aguila Descalza (The Barefoot Eagle), choosing Tlaquepaque for its headquarters. According to Chris Adams, who married Ana Villa’s sister and helped establish The Barefoot Eagle’s presence in Boston, this was in 1963.

The business grew rapidly and soon became Mexico’s leading producer of internationally famous high fashion women’s apparel. Adams provides a detailed case study of The Barefoot Eagle in his book, Up Your Sales in Any Economy. At its peak, the company employed several hundred women in three outlying villages to undertake all the embroidery and decoration, with everything done by hand to maintain the artesanal quality. Most of the cotton fabric used came from Mexico City; the steadfast dyes were imported.

Exhibition of Mexican textiles and designs by Josefa

The celebrity effect was contagious. Among those photographed wearing Josefa dresses or blouses were Elizabeth Taylor, Lady Bird Johnson (who was featured wearing a Josefa dress on the cover of Ladies Home Journal), Glenda Jackson (in Touch of Class), Sofia Loren, Diana Ross, Loretta Young, Princess Grace of Monaco, Nancy Reagan, Deborah Kerr and Farah Diba, the wife of the former Shah of Iran.

According to journalist Sheryl Kornman, Josefa was just “as exciting, as articulate, as vivid as the costumes she designs.” Kornman described Josefa as casually dressed, wearing a “flimsy blue and red short shift” with her “long brown hair in a braid tossed forward over one shoulder,” and sandals on her feet. The designer said she had started by making jewelry in Puerto Vallarta a little more than a decade earlier before beginning to sew her own clothes and making some for friends. She then taught her “house girl” and others how to sew, and began to produce designs inspired by indigenous Huichol and Oaxacan handicrafts and art.

By 1970, Josefa and her husband were living in Santa Fe, New Mexico, from where she returned to Guadalajara at least twice a year, timing the visits to prepare for a summer line released in April and a fall/winter line released a few months later.

Josefa was the first Mexican dress designer to have her work grace the cover of Vogue Paris. Models showing off her designs also featured on several covers of Vogue and McCalls. Interestingly, not long afterwards, another designer – Gail Michel de Guzmán – who lived at Lake Chapala at the same time as Josefa, had her own work featured in Vogue Paris.

According to Adams, Josefa considered it a compliment that she was the most copied designer in Mexico. Adams played a part in the commercialization of The Barefoot Eagle brand, producing a factsheet and sales pointers for all the salespeople in the various retail stores. Among other things, salespeople were instructed to ensure that prospective clients understood that even if they thought the items were pricey, they were definitely worth every centavo because they were hand-embroidered designer creations and works of art. 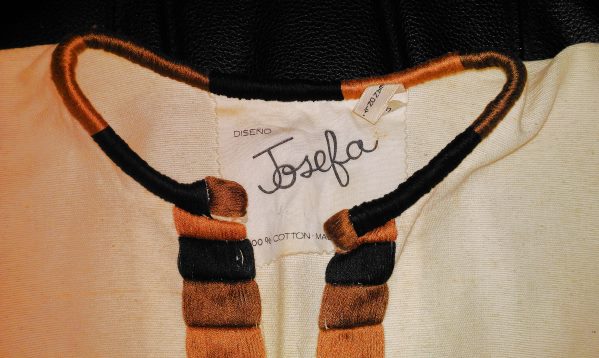 The company continued to grow. Josefa was one of the first designers in Mexico to establish and supply a large-scale export market. Several earlier designers, such as Jim and Rita Tillet, had successfully established smaller operations and exported Mexican fashions, though they never succeeded in scaling up production to the levels reached by The Barefoot Eagle. Others, such as American Charmin Schlossman, who lived in Ajijic in the 1940s, took their creativity back home and established successful firms north of the border.

The extraordinary export success of Josefa was recognized by Mexico’s federal government which awarded her company a National Export Prize seven years in a row.

The extraordinary quality of Josefa’s designs and workmanship has led to her work being included in several important exhibitions. The largest single exhibition (250 designs) was held at the Museo de la Indumentaria Luis Marquez Romay in Mexico City in 2004. This stunning exhibit of Josefa’s manta kaftans in distinctive Mexican textures and colors (turquoise, green, fuchsia, rose and yellow), decorated with embroidered flowers, designs influenced by Mexico’s indigenous peoples, butterflies and geometric patterns, together with silk threads and sequins, was a kaleidoscope of color. 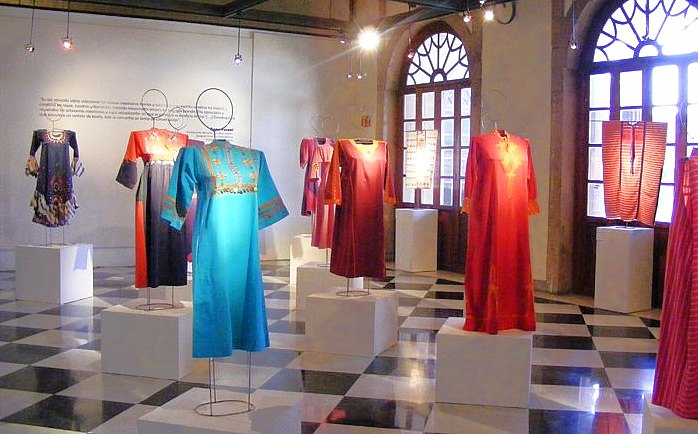 Exhibition of Mexican textiles and designs by Josefa

In 2009, another exhibition, “México de autor, historia en color” showcased Josefa’s designs alongside indigenous textile items from the Mapelli collection of the Mexico City Popular Art Museum (Museo de Arte Popular de la Ciudad de México). Curated by Mario Méndez, that show ran from January through March. The juxtaposition of fashion designs with indigenous textiles emphasized what they had in common and how one influenced the other. Josefa’s “Mexicanized” designs, celebrating bright colors, owed much to, and simultaneously increased the appeal of indigenous textile patterns and clothing.

Relatively little is known for sure about her life story outside fashion. Adams described Josefa as Mexican born and residing in Tlaquepaque and the state of Oregon. According to a 2004 news piece, Josefa claimed to have been born in Chihuahua more than 80 years ago, while friends claimed she had arrived in Puerto Vallarta 30 years ago from the state of Oregon.

Josefa lived at Lake Chapala for many years in the 1970s and 1980s. Her home (with a room converted for a design studio) was in El Limón, just west of San Juan Cosalá. The en-suite in her imaginatively decorated residence featured a special hand-made foot bath, probably the work of her friend Jorge Wilmot, and likely much used given that Josefa was accustomed to going barefoot most of the day.

After becoming successful, Josefa traveled widely, but in retirement, she experienced both health and financial problems. While she felt forced out of retirement by her financial situation, she was unable to resume her fashion design work on account of her health issues. She enlisted the help of a nephew in the U.S. but he chose to sell her property and put his famous designer aunt into a nursing home.

In 2008, a fashion fund raiser was held to help pay for her medical treatment.

Josefa Ibarra, artist, entrepreneur and mother of Mexican fashion, died in about 2010. Her decision to develop folkloric “Neo-Mexican” designs and her insistence on incorporating artesanal workmanship prodded Mexican fashion design into a direction still evident today.

There is continued international interest in Josefa’s designs. For example, her work was showcased north of the border in a December 2016 exhibit, “La Familia”, at Friends of Georgetown History (6206 Carleton Ave S) in Seattle, Washington. The show was of selected pieces from the collection of Allan Phillips, a grandson of Josefa’s sister, Olivia.

In 2017, Mexico was the featured country at the VII Congreso Bienal Latinoamericano de Moda in Cartagena, Colombia. An accompanying exhibit took a retrospective look at the history of Mexico’s fashion industry, and highlighted the role of Josefa – “an icon of national fashion design” – in setting what was then a nascent industry on the path to global success. The exhibit included contemporary work by students from the Universidad de Guadalajara that echoed the path laid down by Josefa.

Josefa’s legacy lives on. Her story has been shared with succeeding generations of fashion students in Mexico and she is often referred to as “the mother of Mexican fashion” or as “Mexico’s Coco Chanel”. Students are taught that it is perfectly possible (indeed fashionably current) – and profitable – to integrate indigenous, local design into the global fashion scene.

Please contact me if you can supply biographical details about Josefa.

8 Responses to “Josefa, the “mother of Mexican fashion design””