For a sense of what Guadalajara and Lake Chapala were like in the early 1960s, the movie Guadalajara en verano is a great starting point. To watch the 95-minute film, released in 1965, via Youtube, click the link.

Guadalajara en verano is an enjoyable mix of a simple, cross-cultural romantic storyline in the city of roses and a documentary highlighting some of Jalisco’s tourist sights and infrastructure.

Written by Adolfo Torres Portillo, and co-produced by José Luis Bueno and Xavier Torres Ladrón de Guevara, the movie was filmed in the summer of 1964 in Guadalajara, at Lake Chapala and at the Pacific coast beach town of Melaque. 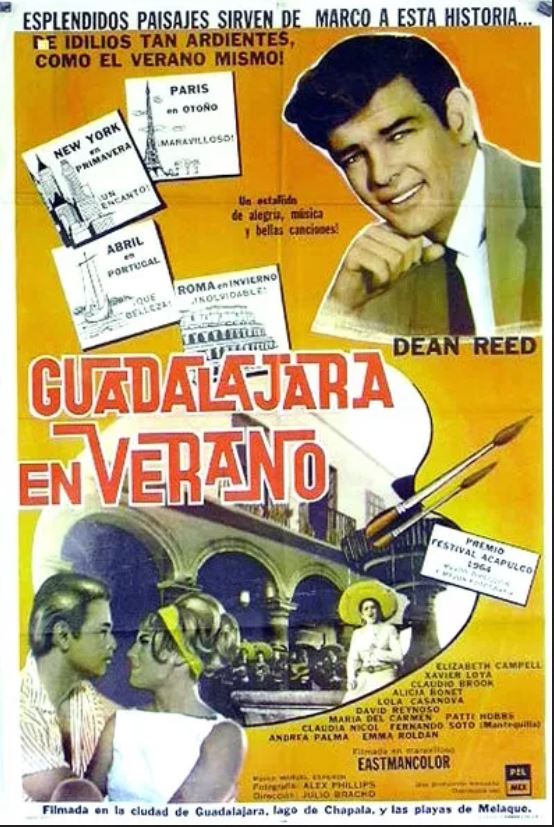 The plot revolves around a group of students who arrive in Guadalajara to attend summer school classes. This allowed the producer to open the movie with shots illustrating Guadalajara’s excellent links to the outside world via buses, trains and its international airport, and its varied accommodation offerings, from a casa de huespedes to the Hotel Fenix and Camino Real. In those days, the city streets were not clogged with traffic, the roses bloomed in profusion and the parks were well-maintained gardens..

Having foreign students visit Guadalajara also provides the excuse, if one were needed, to film the city’s newly-opened Hilton hotel and follow the students around as they explore the city’s markets, parks and buildings, with time spent admiring some of the many murals that grace its public buildings, including the Hospicio Cabañas (then an orphanage, now the Cabañas Cultural Institute) and the Government Palace. The movie’s director, Julio Bracho, later made a film about the New York experiences of Jalisco muralist José Clemente Orozco: En busca de un muro (1974).

The part of Guadalajara en verano made at Lake Chapala includes footage of the highway, the Beer Garden in Chapala and a luxurious private residence.

Needless to say, the movie does not miss the opportunity to showcase a girls’ choir, mariachi singers and musicians, and the Ballet Folklórico de Jalisco (performing the Jarabe Tapatío) along the way.

The short Melaque section, near the end of the movie, served to underscore the tourist potential of the Jalisco coast and promote the then relatively unknown attractions of the Pacific coast of Jalisco, coincidentally at about the same time as Richard Burton and Elizabeth Taylor helped put Puerto Vallarta on the map.

It is a sobering thought that the movie was made at a time when the population of Guadalajara had barely reached one million (compared to around 5 million for the metropolitan area today). On the other hand, 1964 was the year when Walt Disney visited the city for the “De Pueblo a Pueblo” meeting, Bing Crosby promoted golf at Guadalajara Country Club, Tequila Sauza started sponsoring “Noches Tapatías” on national TV, and when the Chapala Society officially changed its name to become The Lake Chapala Society.