Accomplished amateur artist Sid Miller painted and sculpted in Ajijic from 1982 to shortly before his death in 1998. His work was included in numerous local exhibitions, alongside that of friends such as Georg Rauch and Peter and Carole D’Addio.

Miller was born in Brooklyn, New York, in 1912 to a Lithuanian Jewish couple who had met in New York; he was the youngest of six children. To help pay his tuition while studying politics and history at Brooklyn College, he made stained glass vent covers. When revisiting Brooklyn almost thirty years later in 1961, he was delighted to see that many of his decorative vents were still in place.

He was also a fine musician who, in his youth, played the clarinet and saxophone in jazz bands. While still in his twenties, Miller had played in bands on Hudson River boats, as well as in the Catskills and the Caribbean.

Miller met his future wife on a blind date in San Francisco in 1944, while awaiting being shipped out to Japan. She was a teacher, born in Detroit to parents of Hungarian heritage. They married three weeks later, barely a week before he left San Francisco to serve in Japan for 18 months.

The departure for the Far East was somewhat unexpected given that Miller had been preparing originally for a mission in Spain by taking intensive Spanish classes. The Spanish he acquired at this time proved to be extremely useful later in his life when he created a life in Mexico.

During his time in Asia, Miller sent regular letters back home, decorated with informal drawings. (This brings to mind the charming decorated envelopes used by Tink Strother when writing to her husband, Vane, while he was serving in the U.S. military.)

It was while serving with the U.S. Air Corps in the Pacific, in New Guinea, that Miller first began to carve wooden sculptures, selecting the female form as his preferred subject matter. Some of these sculptures, especially the ones of mother and child, are beautifully observed and executed.

After is safe return from the war, Miller and his wife settled in the San Fernando Valley, where he slowly built up a career, graduating from selling vacuum cleaners to marketing furniture and interior decorative items. Miller eventually established his own independent interior design business. Among his more noteworthy clients were the singer June Wayne (very popular at the time) and O. J. Simpson when he was married to his first wife.

Miller and his wife first visited Mexico in the 1950s, sightseeing in Mexico City and Acapulco. In the early 1970s, they visited Europe. Miller lost his wife, who worked as a teacher at private schools for emotionally disturbed children, owing to an unfortunate accident. A diabetic, she stepped on a tack while barefoot, acquired a serious infection, and died less than a year later in 1978.

Photo of Sid Miller at his home in Ajijic. (courtesy Judy Miller)

Four years losing his wife, Miller moved to Mexico. He lived first in Vista del Lago, the subdivision east of Chapala that attracted a disproportionate number of retired military, before moving to Canacinta, just west of Ajijic. In 1988 he bought a house at the entrance to Villa Nova which he remodeled almost immediately to include a second bedroom and a casita. This home provided a wonderful backdrop for his art and was the perfect place for entertaining. 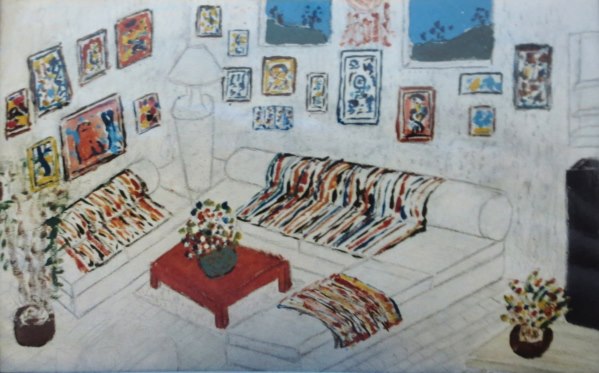 Sid Miller’s own painting of his home in Ajijic. (courtesy Judy Miller)

A short man, Miller had something of the air of a distracted Einstein about him in his later years, an impression only heightened by his disheveled white hair; family photos support this uncanny resemblance.

Miller was an incredibly talented and creative individual. He was never made any effort to commercialize his art and gave away many of his original pieces as gifts to friends and family. Because he used what materials were at hand, including cardboard and off-cuts of wood, some of his work has not aged well. Nowhere is his propensity to use surplus materials more evident than in his highly-original irregular polygonal shapes and frames. Miller never had any formal art training and it took him about six weeks on average to complete one of his sculptures. 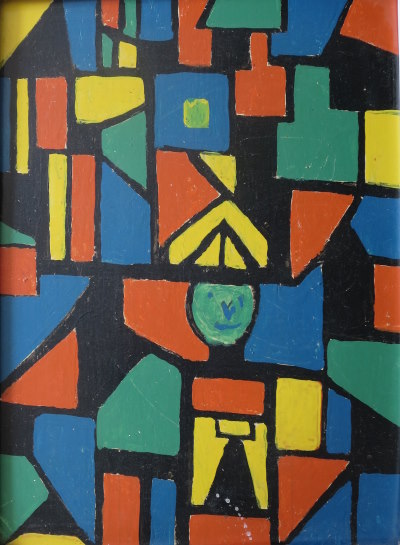 Given the choice, he preferred sculpture to painting, saying in an interview in 1986 that he couldn’t paint but had “a natural inclination for the three dimensional figure.” “Sculpting”, he said, “relaxes me, it keeps me alive and young.”

His sculpture exhibits at Lake Chapala included a solo show at the Art Studio Galeria in San Antonio Tlayacapan in March 1989. The accompanying promotional blurb praised his originality: “Sidney is as colorful as his work.”

Miller’s daughter, Judy Miller, retired to Ajijic a few years ago. She is also a distinguished artist whose preferred medium in retirement is pastels. Judy is a Master Circle Pastelist with the International Association of Pastel Societies (IAPS). Her artistic career, however, was as a ceramicist. After studying at U.C.L.A. and U.C. Berkeley in the early 1970s, she began working as a professional ceramicist, eventually making more than 50,000 hand-colored plates – depicting emotionally-engaged scenes from life – before retiring in 2002. This career stemmed from necessity and serendipity. When she moved into her first apartment, she had no tableware and decided to make her own plates, decorated with scenes from her past.

Both her ceramics and her superb pastels have been featured in numerous exhibits in the U.S. and elsewhere.

For more about her work, please visit her website.