Francisco González Rubalcaba y Cabo wrote and illustrated a short book about Lake Chapala in the 1880s. His charming naïf illustrations may not be fine art but they are some of the earliest paintings known of the lake. What is more, Rubalcaba did not paint only the village of Chapala (as so many other artists have done), he also painted several places that have rarely, if ever, been painted since! These include La Palma, La Angostura and Agua Caliente, all on the southern shore.

González Rubalcaba’s book – Geografía del territorio del lago de Chapala – was published in a facsimile edition in 2002 by ITESM in Guadalajara. The text is dated 29 May 1880 but the map in the manuscript was completed in Guadalajara and is dated 28 April 1882. 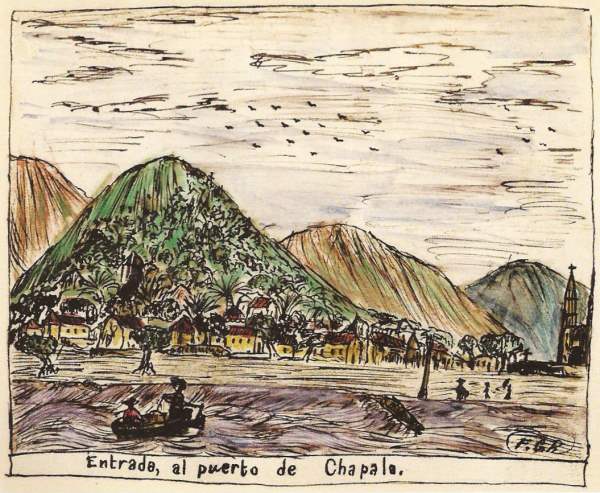 The color illustrations in the book were drawn in tinta china (India ink) with a wash of watercolor added.The image above shows far more buildings (and larger buildings) along the shoreline beneath Cerro de San Miguel in Chapala than most historians have claimed existed there at the time. Was this wishful thinking on  González Rubalcaba’s part or was he really depicting what he saw?

I have long argued that the commonly-repeated date of 1895 for the start of holiday homes in Chapala is demonstrably inaccurate, and this drawing serves to bolster my conviction. For more details, see chapter 37 of my Lake Chapala Through the Ages: an anthology of travellers’ tales. 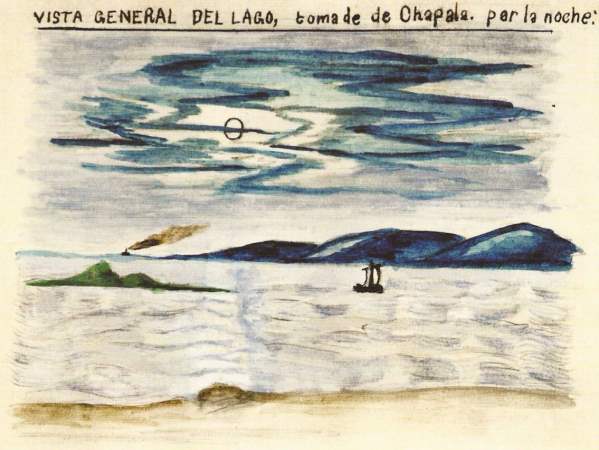 Francisco González Ruvalcaba. General view of the lake at night from Chapala. c 1882.

This unusual nocturnal view of the lake, as seen from the village of Chapala, is especially interesting. It includes a typical square-sailed canoa, an island (presumably Isla de Mezcala, given its relief) and, in the distance, a steamship. Elsewhere in the book, González Ruvalcaba includes a drawing of the steamship Chapala approaching a port.

Virtually nothing is known about Francisco González Ruvalcaba. He is presumed to have been a lawyer. In 1853, as “juez de letras” (professional judge) in Sayula, he published a complaint “made by the Supreme Government of the State of Jalisco against the jefe politico of that place [Sayula], D. Claudio Gutiérrez, for the many excesses he had committed…”

If you know any more details about this interesting author-artist, please get in touch!