Among the very few early images of Chapala that depict village people going about their everyday lives, is this postcard from about 1910 entitled (on its reverse side) “Chapala. Un mercado en México – Mexican market.” 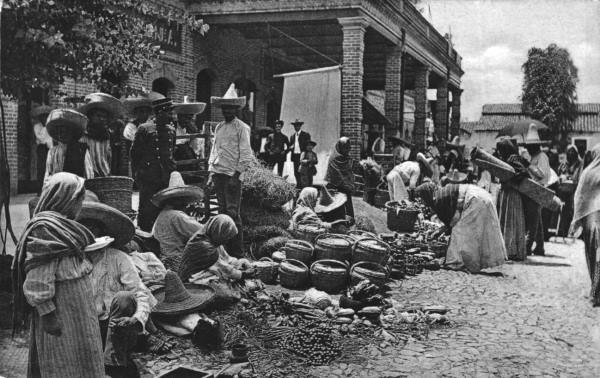 The postcard was published by Juan Kaiser. Given that Kaiser lived in Guadalajara, he was somewhat loose with his titles and his geography. The postcard actually shows an open-air market in the village of El Salto, much closer to Guadalajara than to Chapala! The building to the left of the open-air market in the image is the former tienda de raya (hacienda store) in El Salto, Jalisco, near Juanacatlán Falls; the building is now the town’s Centro Cultural.

In his defense, Kaiser was a savvy businessman and postcards such as this one were clearly designed to appeal to a much broader audience than only those visiting El Salto. The market vendors displaying their wares on the sidewalk and prospective purchasers inspecting the fresh produce made for a timeless scene.

Fortunately for Chapalaphiles, there are several early descriptions of the market in Chapala, including this one by Polish traveler Vitold de Szyszlo who witnessed the real Chapala market in 1910:

On the dusty road appeared groups of horsemen. They were selling milk, fruit and vegetables, trotting, loaded with baskets and containers of various sizes. Large cowboy hats completely masked their faces; a blue shirt with pants of the same color and leather huaraches completed their attire. Country girls with olive complexions and braids black as ebony, carefully tied on the nape of the neck, followed, sometimes sitting two on the same mule or donkey, like proud Amazons. Others, darker skinned, let the ivory of their pearly white teeth show through their gracious smiles and the blazing heat of the Andalusian gypsy show through their burning gaze while their silvery voices resounded in harmonious bursts of laughter.

The market, in the center of the village, is the meeting point of all these colourful people. Under multicoloured awnings are mounted pyramids of fruit and vegetables, bananas, oranges, lemons, watermelons, melons, papayas, mameyes, lettuces, sweet potatoes, red and hot peppers. Elsewhere, zealous merchants offer fresh tortillas and tamales of golden cooked corn, and pulque, the smell of which fills one with intense repulsion.

On the other side of the square, cluttered stalls display sombreros, wool sarapes and leather huaraches.”

More details of Vitold de Szyszlo and his visit to Chapala can be found in chapter 55 of  my Lake Chapala Through the Ages: an anthology of travellers’ tales.