German artist Peter Woltze is primarily known as a watercolorist who specialized in street scenes and architectural studies. He lived in the U.S. for many years at the end of the 19th century and his beautiful painting of Chapala, dated 1899, is among the earliest watercolors known of the region.

Woltze was one of some twenty artists who were hired by Austrian artist August Lohr (1842-1920) and German artist William Wehner who had partnered to establish the American Panorama Company (APC) in Milwaukee, Wisconsin, two years earlier. They commissioned these artists to work on large panoramic paintings for the APC. Lohr later moved to Mexico, where he painted Lake Chapala in about 1905.

During his years in Milwaukee, Woltze contributed to several German language publications and studied art with Friedrich Wilhelm Heine (1845–1921), who set up the Heine School of Art in 1888. 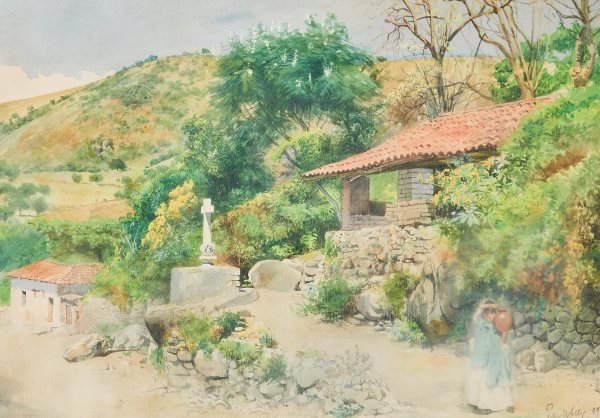 The Milwaukee Art Museum has several Woltze paintings, including one of his few known portraits, in its permanent collection. In style, Woltze, influenced by the Grand-Ducal Saxon Art School in Weimar, moved away from classical composition towards more natural “genre” paintings based on an appreciation of nature. Among the prominent artists of this School was Max Beckmann, who also moved to the U.S., where he taught creative American artist Barbara Zacheisz Elstob, who painted in Ajijic in the early 1950s.

Woltze became a member of the influential Salmagundi Club of New York, which holds regular art exhibitions and has amassed its own permanent collection, which includes a work by Gerald Collins Gleeson (1915-1986) who also painted in Chapala. Alan Horton Crane (1901-1969), also a member of the Salmagundi Club, visited Chapala in 1949 to produce some striking lithographs.

In addition to painting scenes in the Milwaukee region, Woltze also spent time in New Orleans and the south, where he painted numerous street and genre scenes.

Woltze visited Mexico in 1899, perhaps to visit former colleague August Lohr, and painted at Chapala that year, only a year after the opening of the town’s first international hotel, the Hotel Arzapalo. (Chicago-based artist Richard Smith Robbins (1863-1908) had visited Chapala the year before.) Woltzes lovely watercolor of Chapala, sold at auction in Germany in 2019, is unusual in that it does not show the lake but focuses on the essential elements of rural life.

In 1900, Woltze returned to live in Germany, settling initially in Frankfurt am Main. Three years later, on 27 March 1903, he married Helene Meurer in Weimar in central Germany. The couple moved to Weimar in 1907, the same year Woltze published a portfolio of watercolor views of the city’s historic buildings.

Peter and Helene Woltze visited the U.S. in October 1909. Four years later, his wife returned to New York to mount an exhibition of almost 100 of her husband’s superb watercolors at the Waldorf-Astoria. A news report of the time emphasized the quality of the works on display, which were all “painted on English water color paper in English-made colors.”

Peter Woltze died in Weimar on 4 April 1925, at the age of 65. Examples of his Milwaukee paintings have occasionally appeared in group shows, such as Wisconsin Artists 1855 Until Today (1963); A Century Plus of Wisconsin Watercolors (1976); Collecting the Art of Wisconsin – The Early Years (1996) and An Unfolding Story… Panorama Painting In Milwaukee (2008).

Note: This is an updated version of a post first published 26 March 2020.