American-born artist Barbara Jean Zacheisz Elstob painted in Ajijic in the early 1950s. She lived in Ajijic (where she met her future husband, the writer Peter Elstob) for more than two years, from late 1949 or early 1950 to April 1952.

Barbara Jean Zacheisz was born on 22 October 1924 in St. Louis, Missouri. Her father, Chester E. Zacheisz was advertising manager of St. Louis University and only 37 years old when he died in March 1935. His widow, Claudette V. (McGowan) Zacheisz (known in the family as Claudia), was left with two young daughters: Virginia Lee (“Pat”) and Barbara Jean, the latter only ten years of age. Following her mother’s remarriage (to John “Jacky-Boy” K. Morton), Barbara Jean sometimes adopted his surname, calling herself Barbara Jean Morton.

Little is known about her early education but, in about 1947, having worked as a volunteer nurse (in her home town) during the war, Barbara, then 23 years of age, began to study art with Max Beckmann at the Art School of Washington University in St. Louis. Exiled from Germany, Beckmann, one of the most important painters of the first half of the 20th century, worked as an assistant professor in St. Louis for two years (1947-1949), before moving to New York City where he died in December 1950.

In 1949, Barbara, exhibiting as “Barbara Zacheisz”, was one of the talented young artists, all under the age of 26, whose work was shown at the St. Louis Artist Guild. The show opened on 28 February and ran to 7 March.

After St. Louis, she lived for a few months in New Mexico. It is unclear precisely when Barbara first arrived in Ajijic, but it appears to have been in late 1949 or early 1950. It may have been at the suggestion of Perry Rathbone, Director of the St. Louis City Art Museum, who had not only assisted Max Beckmann’s move to St. Louis, but was also a sponsor of the Ajijic summer art program. (The timing of Rathbone’s sponsorship of the Ajijic program is unclear, so it is equally possible that it was Barbara who first told Rathbone about art in Ajijic). 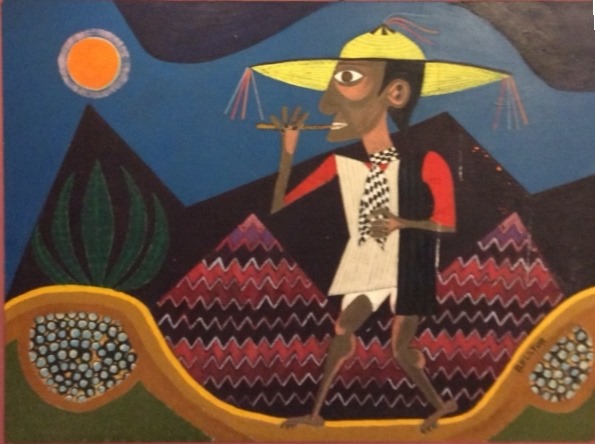 Certainly, by the summer of 1950, Barbara was living in Ajijic, and had begun an affair with writer, entrepreneur and serial adventurer Peter Elstob. It was not, apparently, love at first sight. Elstob was co-organizing the “Peter Arnold Studios” in the village with his long-time friend Arnold “Bushy” Eiloart. It was Eiloart who, having talked Peter up to Barbara, first introduced them, only to be taken aback when told afterwards by Barbara that “he’s not so hot!”

The participants in Peter Arnold Studios were housed in the Posada Ajijic and other rental properties as needed. For most of Elstob’s time in Ajijic, his wife, Medora, remained in the U.K., looking after the couple’s first four children and preparing for the arrival of their fifth.

It is hard to imagine how Barbara’s emotions swung back and forth in 1950. By summer, she was in love with Peter Elstob, and was pregnant. Then, on 27 August, her mother died following a year-long illness. The obituary notice for her mother lists Barbara as living “at home” (i.e. in Missouri), suggesting that Barbara’s visit to Mexico was still being viewed, locally at least, as only a temporary one.

At about this time, Peter Elstob returned to the U.K. for a quick visit to his wife and children. When he returned to Ajijic at the end of September (1950) he was accompanied by his wife, Medora Leigh-Smith (clearly still determined to try to save their marriage) and two of their children: 11-year-old Penelope and 3-month-old Harry. The family lived together in Ajijic until May 1951 when Medora, recognizing that the marriage was over, returned to the U.K.

A few months earlier, in February 1951, Barbara had given birth to Elstob’s son, Peter Mayo Elstob, in Mexico City. Peter Mayo’s younger sister, Sukey, born a few years later in the U.K., recalls that her mother “often behaved as if her ‘real life’ began when she met our father. They were very much in love, right up to her death. He had enormous respect for her art and always supported her fully.” 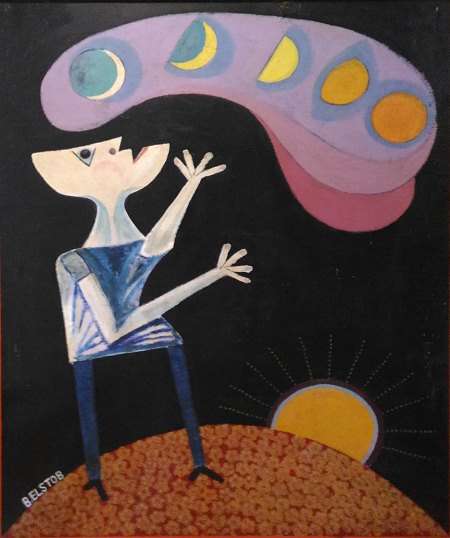 During her time in Ajijic, in addition to painting, Barbara also became a part-time tutor to Katie Goodridge Ingram, who would, much later, open an art gallery in the village, and her brother. The teenage Ingram, whose other tutors included John Upton and John Carson, used to exercise Peter Elstob’s two horses and gave riding lessons to his art studio “guests”. She remembers Barbara living at the “Johnson” house, named for its long-time occupants: Herbert and Georgette Johnson, an English couple who moved to Ajijic just before the second world war broke out. Ingram, who regrets that Barbara never taught her art, adds that Barbara was a heavy sleeper and needed to be woken up every morning. Peter Elstob (and Medora when she visited) lived a few blocks away.

Among Barbara’s artist friends in Ajijic were Ernest Alexander and his partner Dolly, who ran the Club Alacrán restaurant-bar. Through all their subsequent moves, Barbara and Peter Elstob kept several of Alex’s fine photographs of Ajijic and Lake Chapala, which the family still treasure today. Barbara had strong opinions as well as a good sense of humor. One of her Ajijic anecdotes was about when she went to a party and saw a tall, strikingly good-looking Mexican artist across the room. She marched straight over to him, exclaiming “Why, you’re beautiful”, only to be met with the encouraging rebuttal that “No, YOU’RE beautiful… I’m handsome!” 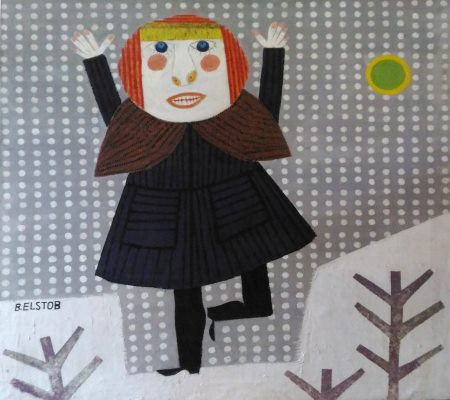 In 1952, in order to remain close to his children, and with Peter’s marriage to Medora irretrievably broken, Peter and Barbara moved to the U.K. They arrived at Southampton (from New York) on 14 April 1952. The ship’s passenger manifest lists Peter Elstob as an author. The separate list of “aliens” (non-UK citizens) has Barbara Zacheisz, a 27-year-old artist, and her infant son, Peter. They settled briefly in St. Ives, Cornwall (1952), and married in Fulham, London, in September 1953, before living most of the following year in Tangier, Morocco. 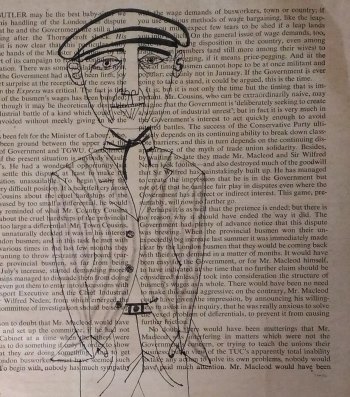 Barbara Jean Elstob, as she was now known, continued to draw and paint, taking her sketchpads and painting gear with her wherever the family traveled. One of several unusual techniques she employed was to sketch out preliminary drawings for her paintings using newspaper text and columns to provide a ready-made grid within which to work out the best composition.

Barbara found inspiration for her art in the works of Joan Miró and she also admired the work of Paul Klee and Wassily Kandinsky. She rarely painted landscapes, preferring to paint portraits and groups of people. Her faces are distinctive and she painted several strikingly-powerful portraits of family members. The backgrounds in her work often feature repeating patterns, an effect achieved in some instances by applying spray paint using paper doilies as a mask. Like many other artists who found inspiration at Lake Chapala, many of her paintings use strongly contrasting colors and large, bold shapes. 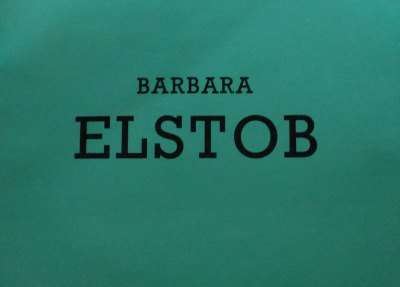 In 1955, twelve of Barbara’s works were shown at Arthur Jeffress (Pictures), a gallery that had opened the previous year at 28 Davies Street, London. They included paintings from Mexico, St. Ives (1952) and Morocco (1954). Barbara also took part in a group show at the American Embassy in London.

In 1956, at the British Industries Fair at Earl’s Court in February, one manufacturer (possibly Lady Clare) was displaying a “range of glass dishes, tablemats and trays” featuring color “bull-fighting lithographs from Mexico drawn by Mrs. Barbara Elstob, who for some years ran a hotel in that country”. (Scenes of London painted by one of Barbara’s friends, American artist Judith Bledsoe, were used by the same manufacturer for a similar range of products.) 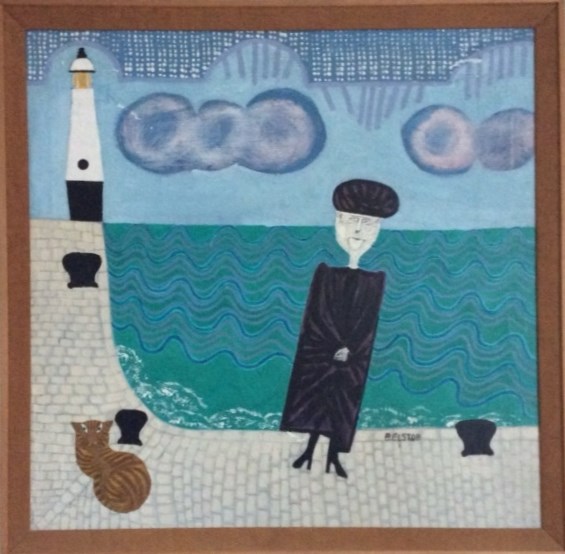 In the mid-1950s, Barbara Elstob renounced her U.S. citizenship in protest at McCarthyism and became a British citizen. 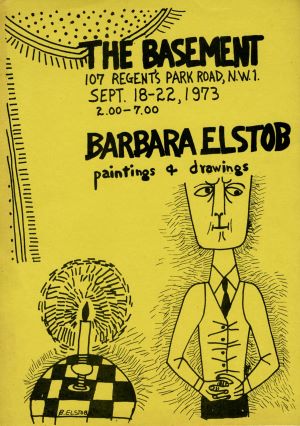 The family eventually settled in a large maisonette (multi-level apartment) on Belsize Park Gardens in London. Barbara’s studio was at the top of the building and she completed a steady stream of paintings, more than sufficient to hold an exhibit at The Basement, a small gallery near Regent’s Park in September 1973. 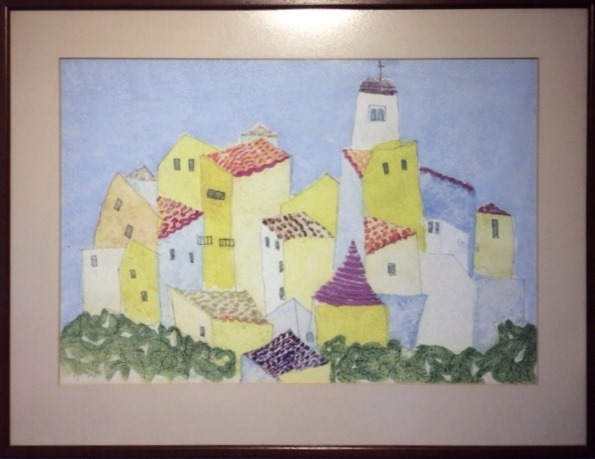 Sadly, shortly afterwards, and at the very young age of 48, she suffered a massive stroke from which she never fully recovered. She completely lost the use of her right arm, her painting arm, but refused to stop painting. “Amazingly,” explains daughter Sukey, “she taught herself to draw and paint again with her left hand and although it was not quite the same, her wonderful style was completely recognisable.”

Peter Elstob remained devoted to his wife throughout the remaining twenty years of her life. The couple was able to enjoy traveling together and, among other trips, revisited Ajijic to see how it had changed. In 1980, a trip to Kenya turned into a real-life drama when they were stripped and robbed while strolling on a secluded beach. Only days later, they were dining in the restaurant of the Norfolk Hotel in Nairobi when a bomb exploded, killing 20 people and injuring 80 others.

Several examples of her work, which retains an endearing charm, were shown for the first time in more than forty years (and widely admired) at the Stogursey Arts Festival in Somerset, U.K., in October 2017. A larger exhibit of her works at some point in the future would surely enhance the reputation in the art world of this extraordinarily talented artist.