William Bentz Plagemann was a prolific American author, who was born in Springield, Ohio, in 1913 and died in New York in 1991. He wrote both fiction and non-fiction and his career as an author spanned half a century from 1941 to 1990.

Plagemann spent a year in Mexico in the mid-1960s, shortly before writing a young adult novel The heart of silence, published by William Morrow & Company in 1967. Ajijic and Chapala are mentioned in the novel which also refers to the Hotel Nido (a popular hotel in Chapala from 1930 to 1994). Plagemann takes some poetic license in the book by giving the Hotel Nido some “cottages.” 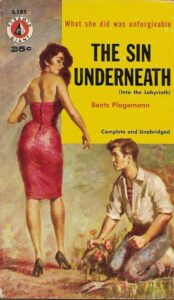 Cover of a Plagemann book

Plagemann was educated in Cleveland and worked as a bookseller prior to the outbreak of the second world war. He graduated from the U.S. Navy Hospital School in 1942 and served as a pharmacist’s mate. In 1944 he contracted polio while serving in the Mediterranean, an experience that was the basis for My Place to Stand, an account of his recovery. He was honorably discharged from the Navy in 1945. Much of his early writing was based on his experiences in the U.S. Navy during the second world war.

An extensive collection of papers and documents relating to Plagemann is held at the Howard Gotlieb Archival Research Center at Boston University.