American journalist, poet and author Clifford Gessler included a chapter about Chapala in Pattern of Mexico, published in 1941. The chapter was reproduced, as “The Haunted Lake,” in Mexican Life the following year.

Relatively little is known about Gessler. He was born in Milton Junction, Wisconsin, on 9 November 1893 and died in Berkeley, California, in June 1979. He was raised in Bangor, Wisconsin, and educated at the University of Wisconsin at Madison, which he left in 1917 (with an M.A. and LittD) to take a teaching job in Elkhard, Indiana. He asked for (and apparently gained) exemption from the military in 1917 on the grounds that he was the sole supporter of his wife, Margaret Hull Gessler (1890-1986), and a parent. 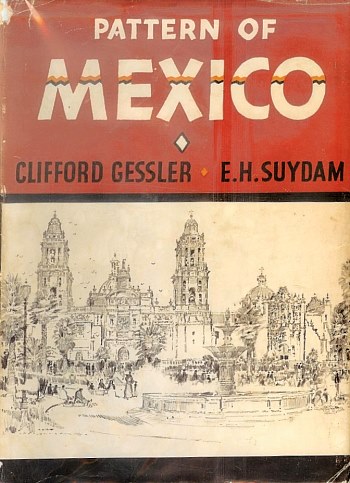 The Gesslers’s son, named after his father, was born in 1920, and the family moved to Hawaii the following year. Sadly, Clifford Jr. died only five years later back in Wisconsin.

Clifford Gessler and his wife remained in Hawaii, where Clifford worked for the  Honolulu Star-Bulletin until well into the late 1930s.

By 1938, they had moved to Oakland, California, where Clifford worked for the Oakland Tribune.

Gessler wrote numerous letters to Witter Bynner prior to the latter’s purchase of a house in Chapala in 1940. Bynner’s replies are held in the special collections of the University of Iowa Libraries.

a pageant of Mexico: the past the present and hints of the future of that strange and beautiful and terrible land march across the neat black-lined page. It is a beautiful book, a poets book, revealing with infinite tenderness the beauty and sorrow and dignity of human life. The drawings by Gladys Brown reflect the varying facets of the Chapala scene.”

In “Haunted Lake”, Gessler describes how Chapala retains “the atmosphere of a world remote from the fevered haste of mechanized civilization,” but is changing:

The shining motor-cars and buses from Guadalajara looked out of place in the simple village clustered around a treeshaded plaza. Indeed, it is but a few years since an automobile was a rarity in Chapala, and the town itself is much as it was then. It is a famous resort for all the surrounding cities, and increasingly for all Mexico: a vacation retreat, a place of honeymoons.

There, as in other towns, we saw life dividing itself sharply. Smartly dressed men and women strolled in the gardens of modern villas along the lake shore to right and left of the village, while the humbler crowd milled around the beer-booths and roast-corn stands fronting the public beach. The foreign tourists at the hotels where a candle was set beside each bed at night for the hours when electric current was off—were, as in any land, a class apart from either.”

At that time, Chapala had no municipal water system:

All day shawled women, with earthen jars on their shoulders and one arm curved up in classic pose, passed to and fro from the well, and, professional watercarriers trotted under shoulder poles from each end of which hung a five-gallon can.”

And why did Gessler decide that Lake Chapala was a Haunted Lake?

For Chapala, residents told me, is haunted—all that valley, and the islands in the many-colored lake. “See that island?” said one. “It is the home of spirits of slain conquistadores.”

Spanish ghosts, and Indian… He told me, too, that the souls of the Aztecs lingered there when their god Méxitl bade the tribe move on in the migration that led them to the central valley of Mexico. “Those spirits glow by night in the form of fireflies in the marshes where the white egrets nest.” Their sacred images, it is said, are still fished from the water of the lake.”