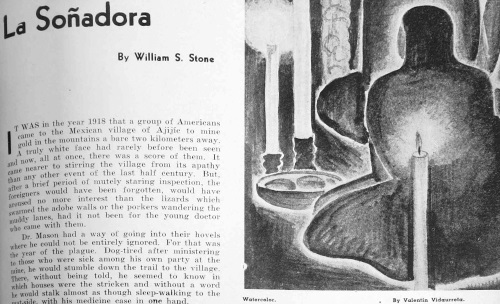 The illustration is by Valentín Vidaurreta, better known as one of the greatest silver designers in 20th century Mexico

The protagonist is a young doctor who has arrived with a group of American miners looking for gold in the hills behind the village:

It was in the year 1918 that a group of Americans came to the Mexican village of Ajijic to mine gold in the mountains a bare two kilometers away. A truly white face had rarely before been seen and now, all at once, there was a score of them. It came nearer to stirring the village from its apathy than any other event of the last half century. But, after a brief period of mutely staring inspection, the foreigners would have been forgotten, would have aroused no more interest that the lizards which swarmed the adobe walls or the porkers wandering the muddy lanes, had it not been for the young doctor who came with them.

Dr Mason had a way of going into their hovels where he could not be entirely ignored. For that was the year of the plague. Dog-tired after ministering to those who were sick among his own party at the mine, he would stumble down the trail to the village. There, without being told, he seemed to know in which houses were the stricken and without a word he would stalk almost as though sleep-walking to the mat-side, with his medicine case in hand.

During the early days of the epidemic, before fatigue had dulled his faculties, he had been surprised and curious at the reception that his visit met. The circle of silent watchers about the afflicted one would part reluctantly. Eyes which had been fixed in sodden helplessness on the victim would turn upon him, burning dully with hostility. And, so he thought, with fear.”

As the epidemic rages around him, Mason continues trying to help the local people but becomes more and more pulled in to the villagers’ world of intrigue, sorcery, and witchcraft. Mason repeatedly overhears them repeating three names in particular:

Carlota, the bruja, the ancient village witch and healer. María, the young cantinera, the operator of a small saloon—she who was literate, her head raised nearly free above the others, but her feet still enmeshed in rank weeds of superstition. Finally Juan, the medico, the outsider who had laughed at witches’ spells and cured with white man’s magic.”

Before long, Mason is drawn back into events that happened eighteen years earlier, in 1900, and his imagination works overtime as the present becomes blurred with the past.

William Standish Stone was born to Captain Arthur W. Stone, a US naval officer, and his wife in Santa Barbara, California, in 1905 and died in Hawaii on 13 January 1970.

While completing a liberal arts degree at Harvard, Stone became very familiar with Mexico, making numerous trips into the interior during vacations before living and traveling there for several years, learning Spanish and “nursing an ambition to write.” When he returned to the US, Stone settled in Tucson and completed a law degree at the University of Arizona. He continued his writing career alongside learning to fly and running a legal practice in Tucson for many years. Stone married Virginia Moss Haydon (1909-1972) in May 1931.

[Mordvinoff was a close friend of “9-fingered” violinist John Langley, who lived in Ajijic for many years after the second world war.  Mordvinoff, who won the Caldecott Medal for book illustration in 1952, was godfather to Langley’s daughter Nicole, born in Tahiti in 1938. It seems quite likely that Stone would also have known Langley, and may have been visiting him in Ajijic when he wrote this short story. ]

If you know more about William Standish Stone’s time in Mexico, please get in touch!

I’m sure that Dr. Mason’s dreamy spirit lives on in Ajijic and fully expect to see him sitting on his bench in the plaza next time I visit…