Fun-loving journalist Kate Karns, who has written many entertaining columns and articles about Ajijic over the years, lived in the village from 1971 to 2013. Karns was the local correspondent for the Mexico City News for several years immediately after Katie Goodridge Ingram. She also ran an art gallery for a time on Calle Colón, the main north-south street leading to the pier.

Katherine Julia Flaten (her maiden name) was born in Hennepin, Minnesota, on 25 September 1921. Curiously, the record of her marriage in 1944 to actor Todd “Rocky” Karns, when both were serving in the U.S. military in New Mexico, spells her first name Catherine with a “C”! She was court-martialed and reassigned shortly after marriage, not because of any spelling error, but because she had had the temerity, while serving in the ranks, to marry an officer. 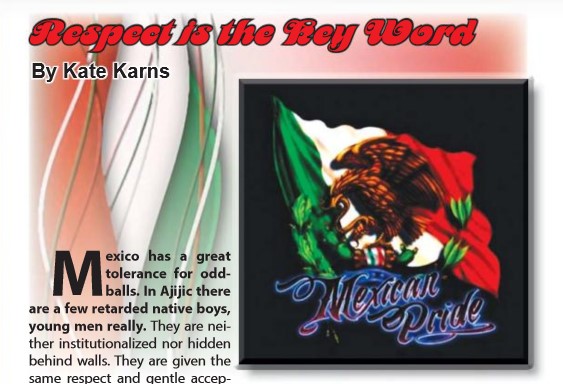 Prior to the war, Kate was well on her way to becoming a Hollywood actress. She performed in high school shows in Milwaukee, studied drama at the University of Minnesota and attended the Maria Ouspenskaya acting school in Hollywood. Tod Jonson, who also lived in Hollywood for years before moving to Ajijic, has said that “Katy Karns, a talent in her own right, had been under contract to Paramount Studios and was a member of the Golden Circle of Players on their studio lot.”

Unfortunately for Kate’s career, the war intervened. She returned home to Milwaukee where she later joined the Army and was trained to fix radios. After the war, Kate and Rocky started a family and lived in Hollywood where Rocky built his acting career, eventually retiring from movies and television to work for the North American Philips Corporation.

Following some prompting by Kate, a profile of her family was published in the September 1950 edition of the Ladies Home Journal in its series, “How America Lives”. Not long afterwards, the magazine published an article featuring Kate modeling some elegant clothing.

When Rocky retired in 1971, the couple moved to Ajijic. Kate had been working for a fabric weaving business in the village for some time before federal authorities realized she lacked any work permit and ordered her to leave the country. She was soon able to sort out her paperwork and return. Kate also worked for seven years in local real estate, found time to be President of Lakeside Little Theater (in 1983/4), and combined family life and all this with writing and being the local correspondent for the Mexico City News.

Kate’s writing is always well-observed and often humorous, with many references to her own experiences in adapting to life in Mexico and to the myriad of quirky characters that Ajijic seems to have attracted in the 1970s.

One of my all-time favorite lines from Kate Karns is her description of the small town of Jamay, on the north shore of the lake, mid-way between Ocotlán and La Barca, in 1988 as “like a running sore; its feet in mud and garbage, its head covered by torn corrugated tarpaper held up precariously by half-finished grey cement-block walls and disintegrating bricks.” Jamay is very different now, but in 1988, her words were only a slight exaggeration.

Kate Karns, who has, with good reason, been critical of those in-comers who fail to learn any Spanish or make any real effort to integrate into the local community, continues to hold the highest regard for the people of Mexico in general, and of Ajijic in particular.

Her husband, Rocky Karns, passed away in February 2000. The couple had enjoyed 54 years of marriage. Kate continued to live in Ajijic until 2013 when she moved to Ellensburg in Washington state to be closer to her children and grandchildren.