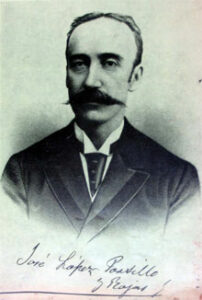 A short story about Lake Chapala, entitled “José la garza morena” (“José the Great Blue Heron”) was published in Cosmos (a monthly magazine published in Mexico City) in June 1912. It is a tale about someone finding a heron that has been shot and wounded, and trying in vain to cure it.

Not a sign back then of the picturesque villas that today adorn and decorate these shores from the town to El Manglar, which is the house where Don Porfirio Díaz used to stay during the time, happy for him, of his all-embracing command; but everywhere was thick scrub, cheerful orchards with severe rocky places, which were in harmony with that rustic and unspoiled landscape.

The lake appeared magnificent and solitary under that divine show, as if it were another asphalt lake, a new Dead Sea. But it was not always thus; and the recollections of better times engraved in my memory transformed this most unhappy spectacle because, before the rising tide of civilization invaded these places with platoons of armed hunters with shining rifles, flocks of ducks would rise suddenly into the air from the marshes as the boat approached.

Note: The translations included above are by the author of this post, which was first published 18 June 2014.

My sincere thanks to Dr. Wolfgang Vogt of the University of Guadalajara for bringing this short story (and his analysis of it) to my attention.