Charles Kaufman, who went on to become an Academy Award-nominated screenwriter, lived for several months in Ajijic in 1929. A decade later, he dedicated his first and only novel — Fiesta in Manhattan — “To the good people of Ajijic.” We will look at this novel in a future post, but this was not his only important link to Ajijic.

Kaufman’s trip to Mexico was to celebrate selling an article to the New York Herald for $75. Accompanied by his girlfriend, Edith Huntsman, Kaufman took off for Mexico in 1929. Among other adventures, they visited Acapulco, took a boat from there to Puerto Angel (on the Oaxaca coast) and rode mules for 10 days over the mountains to Oaxaca City, as well as spending several months in Ajijic.

In 1933, Kaufman spent five months traveling in Spain with a businessman friend, Louis E. Stephens. During this trip, Kaufman was apparently so enthusiastic about Mexico in general, and Ajijic in particular, that he persuaded Stephens that he should stop off in Mexico before returning to New York.

Stephens liked Mexico so much, he settled in Mexico City, started a family and acquired holiday property in Ajijic in 1937. Stephens and his wife, Annette Margolis (later Nancarrow), offered the use of this property to their friend Helen Beth Kirtland when she sought a suitable place to take her young children after splitting up (not for the first time) from her husband Read Goodridge, a Mexico City rare books dealer.

Kirtland took her two young children to Ajijic and never looked back. She founded Telares Ajijic, employed weavers and, through enterprise, good fortune and hard work, built up a highly successful business. Both her children grew up in the village. After attending college in California, her daughter, Katie Goodridge Ingram, returned to Ajijic and ran an art gallery there for many years.

Had it not been for Kaufman’s powers of persuasion, none of this might have happened. 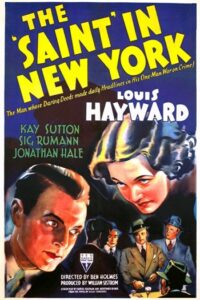 Kaufman meanwhile had stories published in the New Yorker and Esquire and was well on his way to becoming a successful screenwriter. He moved to Los Angeles in 1936 and already had several screenplays to his credit by the time his novel, Fiesta in Manhattan, was published in 1939. Sections of the novel were subsequently published (beginning in June 1940) in Mexican Life.

Return to Paradise was based on the Michener work and starred Gary Cooper. Kaufman’s screenplay for The Story of Esther Costello was nominated for a BAFTA Award for Best British Screenplay. In 1962, the screenplay of Freud, directed and produced by John Huston, won an Academy Award nomination for Best Original Screenplay for Kaufman and his co-writer Wolfgang Reinhart. In 2010, Let There Be Light, written by Kaufman and John Huston, was chosen for inclusion in the United States National Film Registry by the Library of Congress as being “culturally, historically, or aesthetically significant.”

We welcome comments, corrections or additional material related to any of the writers and artists featured in our series of mini-bios. Please use the comments feature at the bottom of individual posts, or email us.