The distinguished American screenplay writer Charles Kaufman (1904-1991) was in his mid-twenties when he lived for several months in Ajijic in 1929, with his girlfriend, Edith Huntsman. A decade later, he dedicated his first and only novel – Fiesta in Manhattan – “To the good people of Ajijíc.” (Note that Ajijic is normally written without any accent.)

The novel is about Juan Perez and his wife who live on the shores of Lake Chapala. This extract from the dust jacket blurb sets the scene: “They were young and their color was the color of warm brown earth – black-haired Indian Juan Perez and his wife Elena, from the village of San Andrés, with the sunlit plaza and the sleepy burros and the mango and papaya trees. And now there, who had never before been more than a few miles from home, were in a huge, plunging boat bound for the United States.” 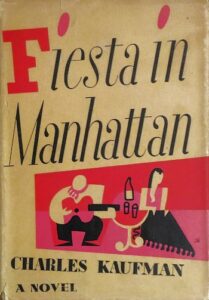 The couple live on the lakeshore: “From their doorway, through the mango and papaya trees they could see the lake sparkling in the morning sun or darkening to indigo under angry skies when the rains came, or lavender and win-colored and hushed when the wind died at sunset.” (14-15)

Juan is a musician. While playing his guitar to accompany a group portraying the Conquest of Mexico at the Three Kings’ festival at Cajititlan, he is spotted by a wealthy American author, Miss Carolyn Crane, who lures him to the U.S., telling him, “You must come to the United States and play your guitar.” Miss Crane, the author, “collects” artists and musicians to help amuse guests at her book-publicizing soirées and pays their passage to New York.

Kaufman includes interesting details of the Cajititlán event (still one of the largest annual fiestas in western Mexico), saying that it celebrated the recovery of statuettes of the Three Kings that had been buried for five years. This presumably refers to them having been hidden from view during the Cristeros years (1926-1929), just prior to his visit to Ajijic. In similar religious vein, Kaufman mentions that Juan once undertook a 7-day pilgrimage to Talpa, and knew the “El Señor del Guaje” church (in Jocotepec). (Details of these important religious events and their significance can be found in chapters 4, 8 and 11 of my Western Mexico: A Traveler’s Treasury.)

The fictional village of San Andrés is described as six hours by canoa from Chapala. When Juan and Elena leave their village for the U.S., they take this boat ride to Chapala, then a bus to Guadalajara, followed by the overnight train to Mexico City. They have a day to get their bearing before catching the overnight train to Vera Cruz (sic) for the ocean-going steamer to Progreso (Yucatán) and onward to New York.

Once in New York, Juan and Elena end up living in a teeming, Spanish-speaking section of Manhattan, alongside Cubans, Puerto Ricans, Spaniards and Filipinos. They become acutely aware of what they have left behind.

When Crane’s patronage eventually runs out, Juan and Elena struggle to survive. They miss Lake Chapala but can’t save enough to return. Given their limited options and worsening financial situation, Juan resorts to working for a drugs dealer.

There are many memorable and well-drawn characters in this entertaining and thought-provoking novel. Kaufman’s intimate knowledge of Lake Chapala and local folklore shine through, making his examination of Juan and Elena’s motives and thoughts a far more searching and accurate portrayal than the vast majority of English-language novels about Mexico.

All in all, I find myself completely agreeing with the last paragraph on the dust jacket that Kaufman was “a new talent, with a fresh point of view, working in an untouched scene, and producing a book of light and shadow, comedy and pathos, that will leave the reader a little breathless of the beauty and terror of life.”

Sadly, plans for a big-screen adaptation of the book, starring John Garfield and directed by Vincent Sherman, never came to fruition. Shooting was supposed to start in the summer of 1940. There is no question that this book would still make a great movie. (If you sell this idea to Netflix, please remember my finder’s fee!)

For more about early foreigners in Ajijic, see Foreign Footprints in Ajijic: decades of change in a Mexican village (2022).