Film director and writer Alfredo (“Fredy”) Bolongaro-Crevenna (1914-1996) visited Ajijic in about 1945 with movie producer Francisco Cabrera. Their visit was noted by Neill James in her 1945 account of the village.

Bolongaro-Crevenna and Cabrera played very significant roles in the golden age of Mexican cinema. Bolongaro-Crevenna directed about 140 films between 1945 and 1995, in genres ranging from melodramas to comedy, horror and science fiction.

Bolongaro-Crevenna was born in Frankfurt, Germany, on 22 April 1914 and was more commonly known as Alfredo B. Crevenna. He studied chemical engineering at Oxford University in the U.K. before returning to Germany to take a position at the UFA film studios in Berlin.

In 1938, at age 24, Crevenna left the UFA film studios and moved to New York City, with the intention of finding work eventually in Hollywood. After several wasted months trying to obtain a work visa, he accepted an invitation from an old school friend to go to Mexico City. 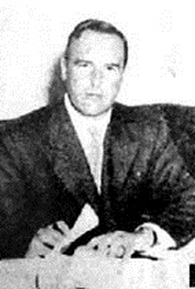 At a welcome party, he was introduced to the film producer Francisco de P. Cabrera. Cabrera was about to start shooting La noche de los mayas (1939) and asked Crevenna to take a look at the script. Crevenna did not at that time speak Spanish, so he translated the script into English overnight and then made various suggestions to tighten up the structure. Thus began the lengthy and exceedingly fruitful working relationship between the two men. Crevenna never did return to live in  New York, and eventually became a naturalized Mexican citizen.

In 1943, Cabrera suggested that Crevenna begin his career as a director in Mexico with the movie Santa in a version starring Esther Fernández and Ricardo Montalbán. Unfortunately, at that time the U.S. completely controlled the supply of film stock. When the U.S.-based Office of the Coordinator for Inter-American Affairs objected to the use of a German-born director, Cabrera was forced to work with Hollywood director Norman Foster, even though Foster did not speak a word of Spanish.

Many of Crevenna’s movies won awards. For instance, Talpa received several ”Ariel“ awards and was nominated for Best Picture in 1957.

Alfredo Bolongaro-Crevenna, described by those who knew him as tall, polite, and with a wonderful sense of humor, died in Mexico City on 30 August 1996, leaving a legacy that included some of the finest Mexican movies of all time.

After the family moved to Mexico, Angela become a naturalized Mexican citizen. She met German-born otolaringologist Dr. Carl “Hannes” Lohmann in 1955 and married him three years later. They spent most of their time in the U.S. but were frequent visitors to Mexico and had a winter home in Quintana Roo. From 1993, they began to spend winters at Lake Chapala. They bought a home in Chapala Haciendas and, in 1995, moved permanently to the area.

Even after Angela Lohman (née Bolongaro-Crevenna) died in 1999, her husband Carl continued to reside in Chapala until his own death in a Guadalajara hospital a decade later.