Lysander Kemp (1920-1992) worked as a writer, professor, translator, and was head editor of the University of Texas Press from 1966 to 1975. During his tenure at UT Press, he collaborated with the Mexican writer Octavio Paz (1914-1998) on numerous translations, including the landmark book The Labyrinth of Solitude: Life and Thought in Mexico. Kemp also oversaw the publication of two collections of Paz’s essays and criticism, and translated the work of several other important Mexican writers such as Juan Rulfo.

Lysander Schaffer Kemp Jr. was born 13 November 1920 in Randolph, Vermont, and died in January 1992 in Harwich Port, Massachusetts. He graduated from Canton High School, Canton, Massachusetts in 1938, where he had been active in tennis, music, and on the stage, in addition to being literary editor of the school magazine The Echo.

He graduated from Bates College, Maine, in 1942 (where he was “class poet” in his final year) and then enlisted in the Army. He served three years in the Caribbean Defense Command, in Panama, Ecuador and Puerto Rico, from 1942-1945. After his discharge, more than 40 poems he had submitted in partial fulfillment of his M.A. (1946) from Boston University were published as The Northern Stranger (Random House, 77 pp). His academic English teaching career included a spell at the University of Buffalo, and publications such as “Understanding “Hamlet”” in College English (Oct., 1951). 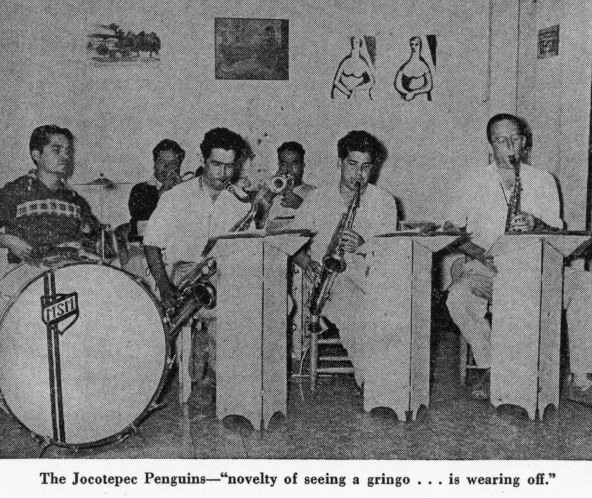 Lysander Kemp (at rt) playing the alto sax in The Jocotepec Penguins, mid-1950s

From 1953-1965, Kemp moved to Mexico and lived for many years in Jocotepec, at the western end of Lake Chapala. His published poems and short articles about the Lake Chapala area include:

Kemp also translated Juan the Chamula: An Ethnological Recreation of the Life of a Mexican Indian by Ricardo Pozas (University of California Press); Selected Poems of Ruben Dario (University of Texas Press); The Time of the Hero, by Llosa Mario Vargas (Farrar Straus & Giroux); Pedro Paramo: A Novel of Mexico, by Juan Rulfo. (Grove/Atlantic, 1959).

Note: This is an updated version of a post first published 8 July 2014.