Priscilla (“Pris”) Frazer (1907-1973) was active in the Lake Chapala area in the 1960s and early 1970s. She made her home in Chapala Haciendas and spent several months every year at Lake Chapala between summers in Laguna Beach, southern California.

Priscilla Jane Frazer, known as “Percy” to her family, was born in Battle Creek, Michigan, on 14 May 1907 and died at the age of 66 on May 17, 1973. The family relocated to California when Frazer was a child and she graduated from the University of Southern California before gaining a Masters degree at Long Beach State College. She studied art at the Jepson Art Institute and Chouinard Art Institute. 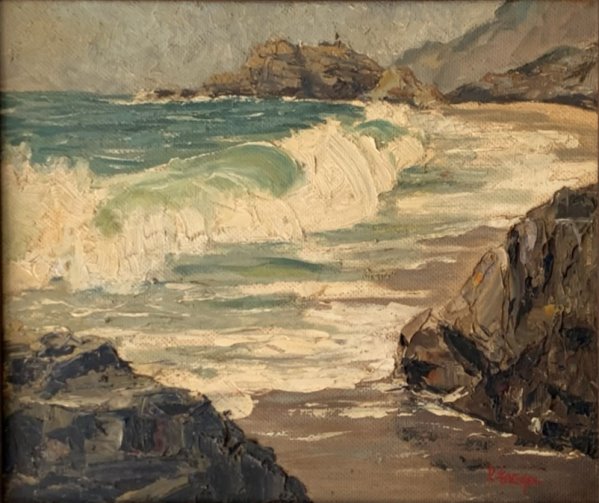 As a child, Frazer’s parents encouraged her to develop wide interests, from archery, fishing and boating to music (she took violin lessons for nine years) and theater. As a teenager, she dreamed of becoming a great actress, and her first degree was in Speech and Drama, after which she worked for two years as Production Manager of the Laguna Beach Community Players.

In her own words, during that stage of her life,

Among her art teachers were Hester Lauman (South Pasadena High School art department), Eliot O’Hara, Rex Brandt, Phil Dike, and Lucille Douglas. In 1928-29, and accompanied by her younger brother, Edwin, Frazer spent eight months with famed art teacher Lucille Douglas on a world tour aboard the SS President Wilson—a “floating university”—painting wherever she went. Her family still owns a document in which Frazer lists her itinerary on that trip, an itinerary that makes me feel exhausted before even leaving home!

During the war, Frazer was a “Ruby Riveter.” She worked as a riveter, in a machine shop, and as a “Factory Layout Draftsman and Method’s Analyst for four years at Douglas Aircraft in Santa Monica.”

In 1948, Frazer and Anne Von were granted joint copyright of a printed paper cut-out toy named “Clipsies,” which apparently consisted of a farm with sets of cut-outs of chickens, cows, kitten, puppies, ducks and other animals. It appears that they designed, manufactured and marketed these kits themselves.

Frazer spent the summer of 1954 in Europe studying art in Oxford (U.K.) and at the Académie de la Grande Chaumière in Paris.

Her first recorded trip to Mexico came in 1955 when she studied with James Pinto at the Instituto Allende in San Miguel de Allende.

Priscilla Frazer, who never married, spent most of her career in southern California, living in Laguna Beach and teaching at Orange Coast College. She traveled widely, including visits to Europe, India, the Far East, North Africa and Spain. Her painting entitled “Ebb Tide, Ireland” was included in a major exhibition of the Society of Watercolorists of California held at the Instituto Mexicano-Norteamericano de Relaciones Culturales (at Hamburgo #115, Mexico City) from 30 August to 14 September 1960. 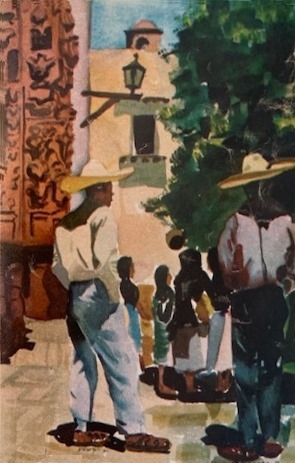 Earlier that year, in April, Frazer had participated in a group show at a private home in Long Beach, California, exhibiting “Mosaic Gate”. Among the other artists included on that occasion was Eugene Nowlen who, with his wife Marjorie, had first visited Lake Chapala in 1950 and had also later lived there for several years.

Frazer managed the One Man Shows at the Laguna Art Gallery for two years. In 1963, an article in the June issue of Ford Times included a photograph of Frazer’s “Sunday best”, the prize-winning watercolor in the Laguna Beach Art Show.

Frazer was already very familiar with Mexico before she bought two lots and built a home in Chapala Haciendas—which advertised itself as the “World’s Best Subdivision” in the “World’s best Climate”—in 1963. She took possession of her new home late that year and is recorded as attending a party at the Posada Ajijic in January 1964, along with another Pasadena artist, Jonathan Scott.

Thereafter she spent several months each year in Chapala, painting and occasionally exhibiting her work in the area. For example in May 1966 she had a show at the Ruta 66 gallery in Guadalajara (located at the traffic circle where Niños Heroes met Lafayette.)

In November 1966, she held a solo exhibition and sale of 50 paintings at the Casa de la Cultura in Guadalajara as a benefit for Chest Clinic #4 of Mexico’s National Campaign against Tuberculosis (which was the only specialist chest clinic in Jalisco at that time). The show was formally opened by the Jalisco State Governor, Francisco Medina Ascensio. Frazer donated all fifty works (worth an estimated 200,000 pesos) to the campaign, and the organizers deliberately set modest prices to ensure rapid sales.

A contemporary reviewer praised “her latest oils and acrylics” for their “beautiful, glowing translucent colors reminiscent of stained glass (an original technique)”, as well as the “great strength and depth” of her watercolors. 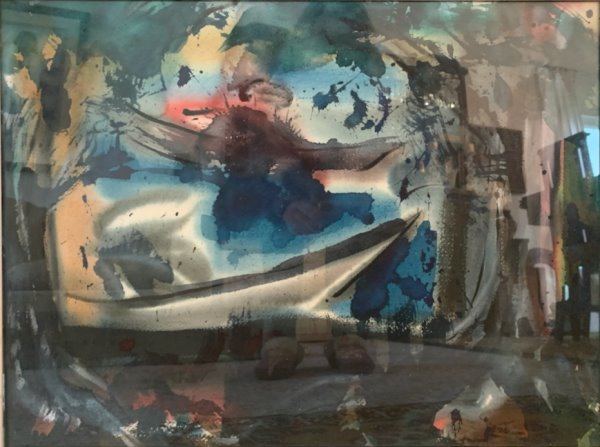 Ajijic gallery owner Laura Bateman, who visited the show a week after it opened, reported that it looked as if would be a total sell out. She found that Frazer’s “history of assiduous study to become a major talent” shone through in “her lively drawings, her fresh representational water colors and in her giant abstract oils.” Frazer shared with Bateman an anecdote about why she had started to paint large abstracts. After winning first place for a watercolor in an early art show, Frazer had been disappointed as she “sat there with her blue ribbon watching the backs of prospective customers passing her work,” while the large, abstract works of another artist—who failed to win any prize—attracted all the public attention.

In January 1970, a few months before setting off with a friend (Luz Luna de Macias) on an extended trip to India (which she had visited 41 years earlier) and Kashmir, Frazer held a one-person exhibit of watercolors and collages at the American Legion in Chapala. Later that year, in August, Frazer was honored by the Board of the California National Water Color Society, which selected one of her works for a star-studded show at the National Academy in New York of 70 works (by 70 different artists) from across the entire country. 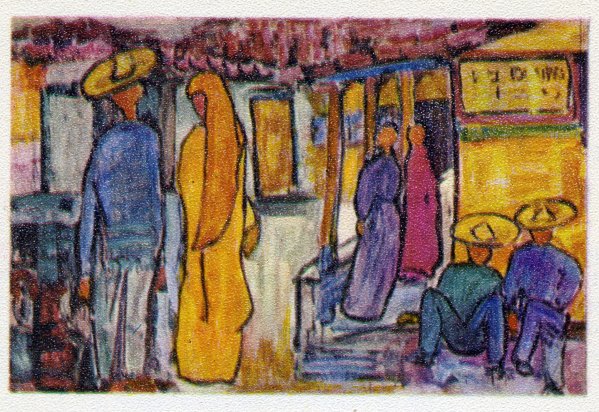 The illustration (above) comes from A Cookbook with Color Reproductions by Artists from the Galería (1972) which unfortunately misspells her first name as “Prisdilla”.

My sincere thanks to Tina Ravizza-Blumenfeld (a great niece of Frazer) for sharing the family’s knowledge of the artist and for locating the Ford Times issue which included “Sunday Best.”

This is an updated and expanded version of a post first published 28 December 2017.