Roy Vincent MacNicol (1889-1970), “Paintbrush Ambassador of Goodwill”, had an extraordinary artistic career, even if his personal life was sometimes confrontational.

The American painter, designer, writer and lecturer had close ties to Chapala for many years: in 1954, he bought and remodeled the house in Chapala that had been rented in 1923 by English author D. H. Lawrence, and then, according to artist Everett Gee Jackson, by himself and Lowell Houser.

After MacNicol and his fourth wife Mary Blanche Starr bought the house, they divided their time between Chapala and New York, with occasional trips elsewhere, including Europe. Their New York home, from 1956 (possibly earlier) was at 100 Sullivan Street. 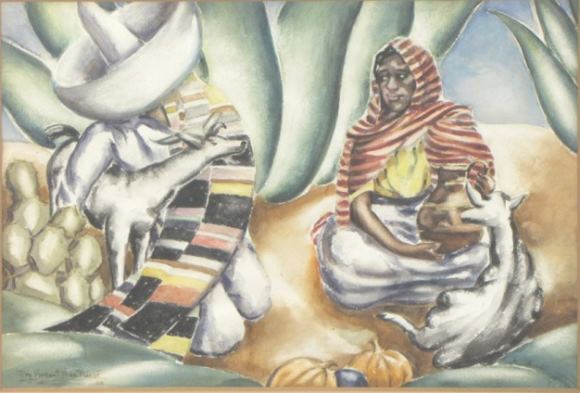 Roy MacNicol was a prolific painter and numerous MacNicol paintings of Lake Chapala are known. Romantically and artistically, he lived an especially colorful life and was involved in several high profile scandals and lawsuits.

Born in New York City on 27 November 1889, MacNicol left home as a teenager to take acting classes and work on the stage, appearing in the farces Twin Beds and Where’s Your Wife? on Broadway in 1919.

MacNicol’s first marriage lasted less than four years. In 1920, MacNicol took vaudeville singer and performer Fay Courtney as his second wife. With the backing of his new wife, MacNicol left the stage to concentrate on his painting career.

Best known for his watercolors and elaborate decorative screens, MacNicol’s work embraced a number of different styles over the years before he developed (in the 1940s) a unique style he termed “geo-segmatic.”

MacNicol’s first solo exhibit was in November 1921 at the Anderson Galleries, New York. His bird and animal motifs on large screens were admired on opening night by more than 800 guests. However, this led to a serious professional clash with a fellow artist, Robert W. Chanler, who called him a “copyist” who had stolen his designs. MacNicol was outraged and took Chanler to court, seeking $50,000 for the alleged libel.

His second solo show was in Palm Beach, Florida, the start of the artist’s long connection with the Palm Beach area.

After visiting France and Spain, MacNicol held a solo exhibition at the Art Institute of Chicago in April 1926, which included many abstract paintings of fauna such as cranes, herons, Australian squirrels and penguins. In the program notes, A. G. Warshawsky praised the abstract compositions that “still hold a human and essentially humorous effect, which adds both to the charm and naiveté of the subject”. 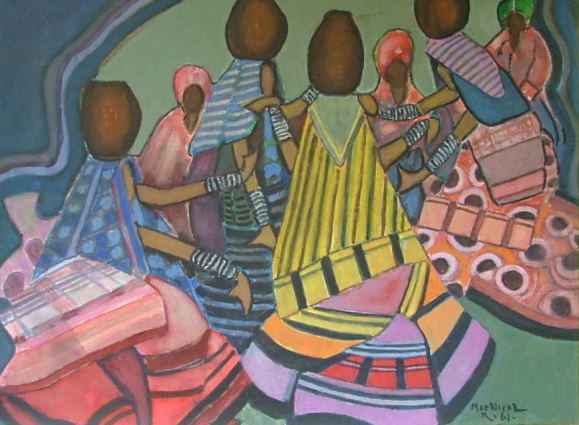 In the 1930s, his wife’s singing career took the couple to Europe, Asia and South America. Between these trips MacNicol held many more solo shows, including one at the Everglades Club in Palm Beach (1931) and at the A Century of Progress World’s Fair in Chicago (1933–34).

In about 1937, the MacNicols, on an impulse, decided to drive down to Mexico to seek more of the “Spanish flavor” that had inspired some of MacNicol’s best work to date. In Mexico City, Thomas Gore, the owner-manager of the Hotel Geneve in the Zona Rosa, commissioned MacNicol to paint two Xochimilco-related murals for the dining room.

Tragically, Fay became ill on their tour of South America and died, at home in New York, in February 1941.

MacNicol’s frequent travels had inspired him to compile a “good-neighbor” show of Mexican-inspired works as a means of improving the ties between Mexico and the U.S. He returned to Mexico City and devoted nine months to painting a series of large (22 x 30″) watercolors, which were the basis of numerous “Good Neighbor Exhibits” shown in galleries across Mexico and the U.S. and in coast-to-coast television coverage.

MacNicol was dismissive of critics who argues his work was influenced by Diego Rivera, though he admitted that perhaps he had been influenced by the “entire Mexican school of art.” In particular, he admired the work of Siqueiros and of Rufino Tamayo, “the most charming, imaginative, and amusing painter in Mexico.”

Eleanor Roosevelt visited the artist’s 33rd solo show in March 1943 at the Pan American Union in Washington, D.C. and eagerly recommended it to others:

“On leaving the club, I went to the Pan American Building to see an exhibition of paintings done in Mexico by Mr. Roy MacNicol. They were perfectly charming, and I was particularly interested in the Indian types. Some showed the hardships of the life they and their forefathers had lived. Others had a gentleness and sweetness which seemed to draw you to them through the canvas. The color in every picture was fascinating and I feel sure that this is the predominant note in Mexico which attracts everyone in this country who goes there.”

MacNicol divided his time over the next few years between Mexico and the U.S. with solo shows in Los Angeles and at the Galería de Arte Decoración (1943) and the Palacio de Bellas Artes (1945), both in Mexico City.

In what MacNicol terms “My great folly” in his autobiography, he married Mrs. Helen Stevick, “wealthy publisher of the Champaign, Illinois, News Gazette,” in Chicago in September 1945. Newly-married, the couple went to Mexico City for their honeymoon, where Stevick’s daughter joined them. This marriage quickly became a complete disaster, leading to ample fodder for the newspapers of the time, who had a field day describing the plight (and possible motives) of the prominent painter. The Steviks accused MacNicol of fraud and had him (briefly) imprisoned in a Mexican jail. In retaliation, MacNicol sued the daughter for $500,000 for her part in wrecking his marriage.

MacNicol may have wanted $500,000, but he certainly did not get it; the case was dismissed on technical grounds. The divorce was finalized in July 1946. 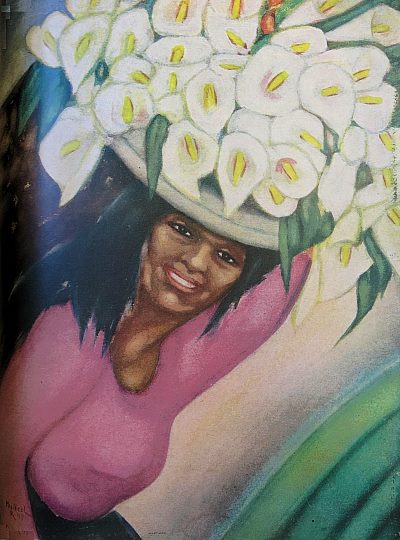 That winter, MacNicol returned to Palm Beach for the first time in 15 years, and made arrangements to hold his 50th solo show there in the State Suite of the Biltmore Hotel. When Mrs Bassett Mitchell (the former Mary Blanche Starr) walked in the room he was instantly smitten. It turned out that Mary was the widow of a Florida financier and was equally enthralled. She bought “The Lily Vendor,” and then they had dinner together. They married in Palm Beach on 27 March 1947, and honeymooned in Nassau. Their love for each other never diminished.

In 1948, MacNiol held the first major exhibition of his “geo-segmatic” paintings in Paris, France. The following year, after a successful show at Penthouse Galleries in New York City, the MacNicols decided to move from Palm Beach to Mexico City. They drove down in their Lincoln convertible (with four truck loads of furniture following behind) and bought a 3,000-square-meter property in Coyoacan. It took them two years to convert it into a house, studio and gallery.

Health issues forced them to sell their Mexico City home and seek a home at a lower elevation.

“We took three months motoring around before we discovered the enchanting little fishing village of Chapala, tucked on the banks of a sparkling lake, set among emerald mountains and violet haze. There was a blessed tranquillity in the low rooftops and the plaza overshadowed by giant laurel trees. But it also had the advantage of a modem four-lane highway leading through rolling green hills from Guadalajara, the second largest, and the cleanest, city in Mexico, a drive of only thirty-five minutes. (Paintbrush Ambassador, 226-7)

They drove into Chapala in January 1954 and, within days, bought the house, at Zaragoza #307, which British novelist D. H. Lawrence had rented in 1923.

The MacNicols restored the house and added a swimming pool. They also added a memorial plaque on the street wall to Lawrence: “In this house D. H. Lawrence lived and wrote ‘The Plumed Serpent’ in the year 1923.” A second wall plaque had a quote from another of MacNicol’s boyhood heroes, Robert Louis Stevenson.

A “list of foreign residents in Chapala” from June 1955, and now in the archive of the Lake Chapala Society (LCS), includes Roy and Mary MacNicol among the 55 total foreign residents in the town at that time, though they were not LCS members. According to MacNicol, “Chapala has its retired American naval and military brass, business men, delightful English, some good writers and myself as the only painter.” 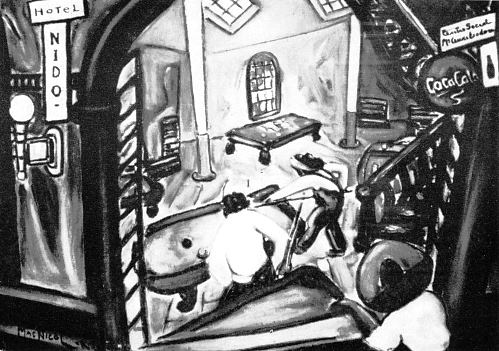 In 1956, MacNicol was persuaded to hold an exhibit in Copenhagen, Denmark. He and Mary flew from Mexico City to New York, carrying 52 paintings and then sailed on the MS Kungsholm across the Atlantic. The show was an unmitigated disaster, largely owing (according to MacNicol) to the complete absence of any help or support from the local U.S. Embassy. The MacNicols returned home to Chapala in November.

It is unclear precisely when the MacNicols sold their house in Chapala, but according to columnist Kenneth McCaleb, MacNicol was disposing of the contents of his Chapala home in the early 1960s, prior to selling it and moving to New York.

The exhibition catalog dating from late 1968 or early 1969 for MacNicol’s “Faces and Places of Nations” exhibit says it was the artist’s 59th (and last) solo exhibit. The catalog describes the “Paintbrush Ambassador of Goodwill”:

“He believes in the universal diplomacy of art as a means to world understanding. His “Faces and Places of Nations” series was begun in 1943. The exhibit has been shown in Mexico City, Spain, Paris, Stockholm, Copenhagen, British West Indies, Cuba, South America, as well as in key cities in U.S.A. The 1949 exhibition was televised coast-to-coast by NBC.”

In addition to painting, MacNicol frequently lectured on art and his formal jobs as a young man included a spell as associate editor at the American Historical Company in New York City. He was a contributor to several newspapers including the Christian Science Monitor, Atlanta Journal, The Times Herald, Mexico City News and The Havana Post.

Examples of his artwork are in the permanent collections of the University of Illinois; Randolph-Macon Woman’s College; University of Havana, Cuba, and the Reporter’s Club, Havana.

Despite enjoying considerable success (and some notoriety) during his lifetime, Roy MacNicol is among the many larger-than-life artists to have lived and worked at Lake Chapala whose artistic contributions to the area’s cultural heritage have, sadly, been largely forgotten.

Note: This is an expanded version of a post first published on 18 February 2016.