Everett Gee Jackson (1900-1995), the renowned American painter, illustrator and art educator, lived at Lake Chapala, apart from some short breaks, from 1923 to 1926 (and returned there in 1950 and 1968). Jackson loved Mexico and during his first visit to Chapala he became intimately acquainted with the artistic creativity of Mexico’s ancient pre-Columbian civilizations, later teaching and writing on the subject.

Unlike so many other early foreign visiting artists who have left very little trace of their presence, Jackson wrote entertaining accounts of his experiences in Chapala and Ajijic in his two memoirs —Burros and Paintbrushes, A Mexican Adventure (1985) and It’s a Long Road to Comondú (1987), both published by Texas A&M University Press. Both memoirs are informative and beautifully illustrated.

Given the wealth of available material on Jackson’s life and art, this post will focus on the personal and wider significance of his earliest extended trip to Lake Chapala. 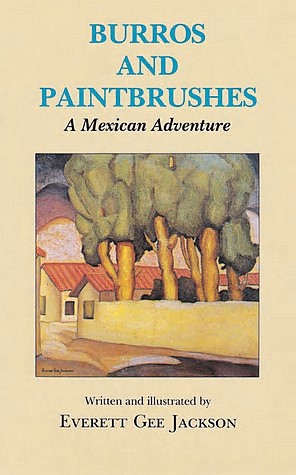 Jackson was born in Mexia, Texas, on 8 October 1900. He enrolled at Texas A&M to study architecture but was persuaded by one of his instructors that his true talents lay in art. In 1921 Jackson moved to Chicago to study at the Art Institute where impressionism was in vogue. At the end of the following year he eschewed another Chicago winter in favor of completing his art studies at the San Diego Academy of Art in sunnier California. He eventually completed a B.A. degree from San Diego State College (now San Diego State University) in 1929 and a Masters degree in art history from the University of Southern California in 1934.

As an educator, Jackson taught and directed the art department at San Diego State University (1930-1963) and was a visiting professor at the University of Costa Rica (1962).

Prior to his first visit to Chapala in 1923, Jackson had already undertaken a brief foray into Mexico, traveling just across the border from Texas into Coahuila with Lowell D. Houser (1902-1971), a friend from the Art Institute of Chicago. In summer 1923, the pair of artists decided to venture further into Mexico, to the city of Guadalajara. After a month in the city, they rented a house in Chapala and were among the earliest American artists to paint at Lake Chapala and Ajijic, though they were not the first, given that the Chicago artist Richard Robbins and Donald Cecil Totten (1903-1967), among others, had painted Lake Chapala much earlier, as had many artists of European origin.

Mexico, though, exerted a much more powerful influence over Houser’s and Jackson’s subsequent art than it did over any of these earlier visitors.

Jackson and Houser stayed in Chapala until the summer of 1925 when they decided to move to Guanajuato to experience a different side of Mexico. En route, they stopped off in Mexico City to view some of the famous Mexican murals, by Diego Rivera and others, that they had heard so much about.

After a few months in Guanajuato, the two young artists briefly parted ways when Jackson went back to El Paso to meet his girlfriend, Eileen Dwyer. 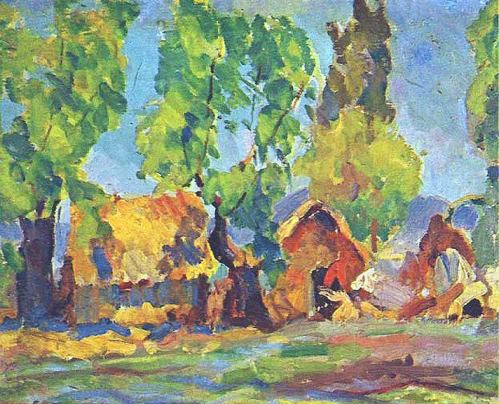 Jackson returned to Mexico, newly engaged to Eileen, and discovered that Lowelito had decided to rent another house, not in Chapala but in the smaller, more isolated, village of Ajijic. Jackson is almost certainly correct in writing that they were the “first art students ever to live in Ajijic”, but there may be a hint of exaggeration in his claim that they were, “the only Americans living in Ajijic.”

After Jackson married Eileen in July 1926, the couple had an unconventional honeymoon, sharing a house in Chapala with Lowelito and a friend. In November the group moved to Mexico City, where they were welcomed by Anita Brenner and an elite circle of young artists and intellectuals that included Jean Charlot (1898–1979). They were also visited by the great muralist José Clemente Orozco (1883–1949). Early the following year, at Brenner’s insistence, Jackson and his wife visited the Zapotec Indian area of the Isthmus of Tehuantepec before returning home to San Diego. 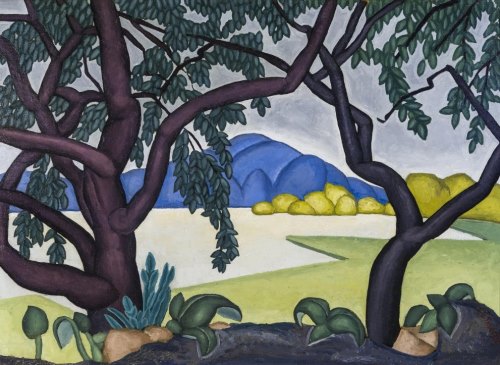 Even before their return, fifty of Jackson’s Mexican paintings had been exhibited at the “The Little Gallery” in San Diego. The exhibit was warmly received by critics and art lovers and further showings of his “ultra-modern canvasses” were arranged for venues in Dallas and New York. Among the paintings that attracted most attention in The San Diego exhibition were “The Lake Village,” (Chapala), which had won first prize at the Texas State Fair in Dallas in October 1926, and “Straw Shacks in Chapala”.

There is no question that Jackson’s subsequent artistic trajectory owed much to his time in Chapala at the start of his career. His encounter with Mexican art — from pre-Columbian figurines to modern murals — transformed him from an impressionist to a post-impressionist painter. He was one of the first American artists to be so heavily influenced by Mexican modernism, with its stylized forms, blocks of color and hints of ancient motifs. Jackson’s work remained realist rather than abstract.

Jackson’s wonderful illustrations enliven several books, including Max Miller’s Mexico Around Me (1937) and The Wonderful Adventures of Paul Bunyon (1945).

In addition to his two volumes of memoirs, Jackson also wrote and illustrated Goat tails and doodlebugs: a journey toward art (1993).

Jackson’s time in Mexico led to a lifelong interest in pre-Columbian art, as evidenced by his short paper, “The Pre-Columbian Figurines from Western Mexico”, published in 1941, and his book, Four Trips to Antiquity: Adventures of an Artist in Maya Ruined Cities (1991). In his 1941 paper, which included images of two figurines found at Lake Chapala, Jackson considered the varying degree of abstraction or expressionism in different figurines.