Ajijic has certainly attracted more than its fair share of strange and colorful characters over the years but perhaps nobody with quite so many true tales to spin as serial prankster Jim Moran.

By the time Moran “retired” to Ajijic, he was almost 80 years old and had put his pranks behind him. Tall, rotund, with a flowing white beard and a deliberate walk, he focused on his photography, art, writing and classical guitar playing.

James Sterling Moran (1908-1999) was one of the most original publicists and press agents in the U.S., pulling one stunt after another to boost the products, services or politicians he sought to promote. Moran never attended college but held a wide variety of jobs from tour guide to airline executive and radio studio manager. In 1989, Time called him, “the supreme master of that most singular marketing device–the publicity stunt.”

In chronological order, Moran’s most noteworthy pranks, many based on acting out old sayings, included selling a refrigerator to an Inuit in Alaska on behalf of General Electric (1938); spending 10 days to find a needle in a haystack to promote a real estate development (1939); leading a bull through a china shop on 5th Avenue in New York City (1940); changing horses mid-stream in the Truckee River, Nevada, during the 1944 US Presidential election; sitting on an ostrich egg for 19 days, until it hatched, to promote the film The Egg and I (1946); and opening an embassy in Washington D.C. for the fictitious country of Grand Duchy of Fenwick to advertise The Mouse That Roared (1959).

His best-known outright hoax was to paint an abstract – “the worst thing I could think of” – and get a friend to submit it to a Los Angeles Art Association show in November 1946 as the work of a previously-unknown artist, “Naromji”. The work, entitled “Three out of Five”, was accepted for an exhibition of abstract art. 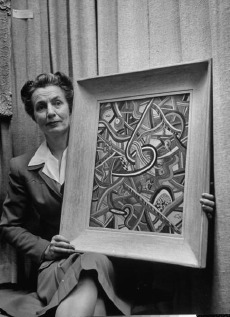 The Los Angeles Times described it as “an astonishing conglomeration of paint, chalk, magazine cut-outs and carmine fingernail polish.” At the end of the month, Moran stepped forward to claim authorship, pointing out that Naromji was Moran spelled backwards, with a ‘ji’ added for confusion and that “Three out of Five” was the name of a hair restorer, since abstract painting always made him want to tear out his hair.

Moran wrote several books, including Sophocles, the Hyena: a fable (1954). The first edition was illustrated by Roger Duvoisin, but a later edition featured illustrations by Andy Warhol. Moran also wrote Why Men Shouldn’t Marry (1969); How I became an authority on Sex (1973) and The Wonders of Magic Squares (1982).

In Ajijic, the multi-talented and highly imaginative Moran was known as a writer, artist and photographer, as well as a skilled classical guitar player.

In 1986, the Galeria Gentes, run by master lithographer Bill Gentes, held a one-person exhibit of Moran’s artwork. The show was comprised of about 100 works by “Naromji”. A contemporary reviewer found that, “His use of brilliant color gives the works an alluring touch. His birds and other serious subjects are strikingly beautiful, while most of the rest convey something of the cosmic giggle to be expected from Jim Moran the prankster.”

Ajijic watercolorist Enrique Velázquez remembers Jim Moran with great affection. He recalls Moran as having lived in Ajijic for several years from the mid-1980s into the 1990s. Velázquez prepared a series of stunningly beautiful illustrations for a children’s book by Moran entitled Linda and the Magic Dream Bubble, a work that was apparently never published.