Confesiones de Maclovia, Martín Casillas de Alba‘s first novel, was inspired by the life of his grandmother who lived much of her adult life in Chapala, including several years in the Hotel Nido, prior to her death in October 1933.

Some seventy years later, the novel’s author-narrator travels to Chapala in the hopes of unraveling more about the life of his long-departed grandmother. In the process he uncovers a cache of documents in a storage room at the Hotel Nido. It includes three notebooks recording the details of an extended series of interviews Maclovia (“Cova”) had given to Juan Bautista (who was planning to write a book about her) in the period February-September 1933, her last months before he accompanied her to Mexico City where she died. The majority of the novel is based on these fictional notebooks. 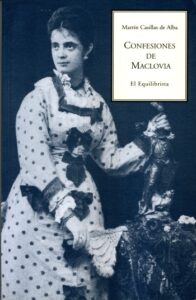 There are many poignant descriptions of Chapala as it used to be, and of significant events in Cova’s life. Cova, born in Tapalpa in 1859, grew up in a distinguished Guadalajara family, the Cañedos, and flitted between the family’s town house in the center of Guadalajara and their hacienda, the Hacienda El Cabezón, near Ameca.

At the time Cova was growing up in Guadalajara the city was developing a vibrant cultural scene. Among the leaders of the artistic and literary circles in which Cova moved was Brazilian violinist and painter Felix Bernadelli (1862-1908). Prior to the Mexican Revolution, with Bernardelli leading the way, Guadalajara was Mexico’s artistic frontier, significantly ahead of Mexico City in terms of experimentation and creativity, leading contemporary Mexican writer and diplomat Eduardo Gibbon to christen the city the “Florence of Mexico”.

Poet José Juan Tablada visited Guadalajara in 1894. He stayed initially at the Hotel Francés before being invited to stay at the home of Rafael de Alba, a brother of Guillermo de Alba (who later married Cova). When Cova first met Tablada, she was struck by his eccentricity. Tablada, for his part, was awe struck by her beauty. (Tablada, incidentally, returned many times to Jalisco and some years later, in 1914, lamented the ruination of Chapala in an opinion piece in El Mundo Ilustrado.)

Guillermo de Alba, short, slim and mustachioed, had also been captivated by Cova’s beauty. When he moved to Chicago to advance his knowledge of architecture, he began a lengthy correspondence with Cova. By the time he returned to Mexico in about 1897, he had already proposed marriage to her, and she had accepted. If this timeline is correct, then de Alba did not design the Hotel Arzapalo (built 1896-1898), as often claimed. Casillas’ fictional version has de Alba still living in Chicago in 1897 and, in the novel, Cova recalls how she had finally said “yes” in 1899, at a time when Guillermo “still had to return to Chicago to complete his career.”

Guillermo and Cova married in Chapala on 27 January 1900; she was 40 years old at the time, he was 25. The couple’s only daughter, Guillermina {“Mina”} de Alba y Cañedo (Martín Casillas’ mother), was born in Guadalajara on 9 January 1902.

Guillermo and Cova were married for more than thirty years. Guillermo built a modest but architecturally stunning family home, Mi Pullman, in the heart of Chapala. The housewarming was held in 1906. The building, lovingly and faithfully restored a century later by an English owner, remains an important part of the town’s cultural heritage. (The story of the restoration is told in detail on MexConnect.com).

Guillermo’s final building project was his crowning achievement as an architect. The imposing, impressive Chapala Railroad Station (now the Centro Cultural González Gallo) opened in 1920 but proved to be Guillermo’s downfall. His debts were mounting and his sources of income were drying up.

Guillermo and Cova lived their final decade far apart: Guillermo sold the family home in Chapala in 1924 and moved to Mexico City in 1926 leaving Cova and their daughter in Chapala. Cova tried to make ends meet by turning Villa Guillermina, the family’s Guadalajara residence, into a boarding house but ended up living the final years of her life in the Hotel Nido. She died in Mexico City (where she had gone to seek medical treatment) in 1933, only a few months after her daughter, Mina, had married José Luis Casillas y Cruz in Chapala.

Confesiones de Maclovia is a fascinating read on several levels. It includes some noteworthy descriptive passages relating to life in Chapala at the start of the 20th century. The novel’s exploration of the possible motives behind the slow breakdown of their relationship, Cova’s withdrawal from her previously active social life towards an almost reclusive existence in the Hotel Nido, and of the reasons why Guillermo de Alba fled for Mexico City, are all especially interesting and thought-provoking. They hold messages that are timeless and all too often ignored.