Noted expressionist artist Jules Rubinstein and his wife Abby, also an accomplished artist, lived in Ajijic from 1966 to 1976.

Born in New York on 9 June 1908, Jules was the son of a Talmudic scholar who, according to a 1975 article in the Tucson Daily Citizen, gave him an empty suitcase on his 14th birthday, and told him, “You are a man now…. I give you the world. Do with it whatever you will.”

“Jules went to sea and spent the next 14 years as a sailor, seven in the South China Sea merchant lanes. He came back a carpenter, worked in construction on New York’s Lincoln Tunnel and the Empire State Building. Came back a painter. New York, L.A., Ajijic.”

Shortly before moving to Ajijic, Jules had married Abby Addis (37) on 9 April 1966 in Los Angeles. The couple first met in an art supply store; two weeks later, Jules presented Abby with “Meeting” (below), his depiction of their encounter. 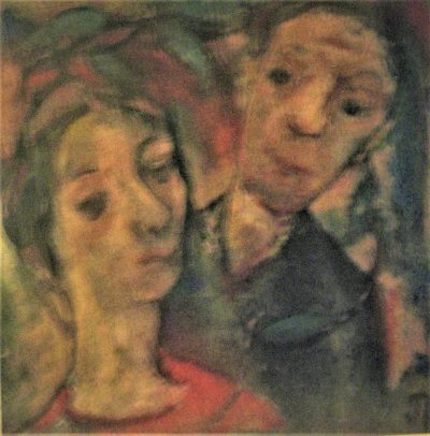 During the Mexico City Olympics in 1968 the Rubinsteins served on the city of Guadalajara cultural team and held an inaugural joint exhibition of paintings at the Galeria Municipal (Chapultepec and España). The exhibit opened on 3 June 1968 and was sponsored by the Olympic Cultural Committee as part of their International Festival of the Arts. In nine days over 3000 people viewed this exhibition. 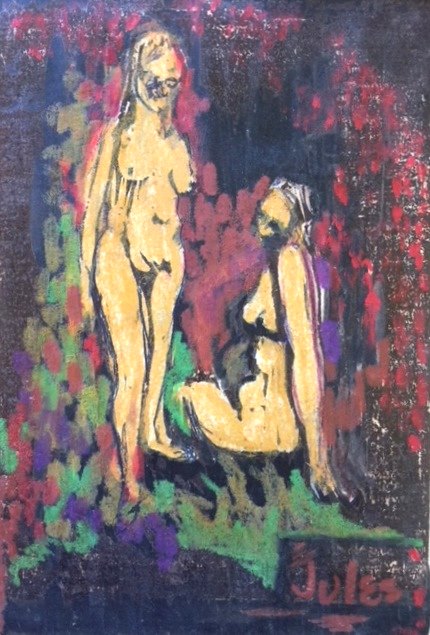 Jules Rubinstein is mentioned in the Colony Reporter in February 1971 as presenting a poem at a Sunday evening of music and poetry held at the home of Aileen Melby, a poet and children’s author, and her husband, Arthur. Jim Marthai and Katie Ingram also read poems at that informal soirée. 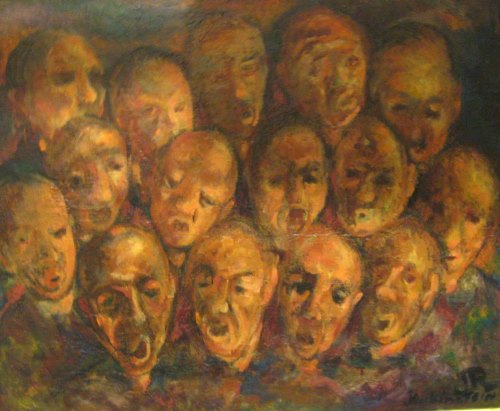 In 1972, the Rubinsteins held another joint exhibition, of about 15 paintings each, at the Instituto Cultural Mexicano Norteamericano de Jalisco (Mexican-North American Cultural Institute). A reviewer (probably Allyn Hunt) asserted in the Colony (Guadalajara) Reporter that, “Abby has made a quietly profound and eloquent statement about the world we live in and those that people it,” while Jules’ works are “expressionism… with a feeling of allegorical mysticism.” 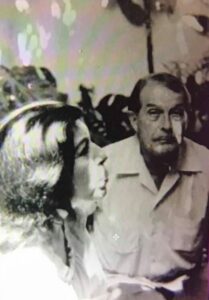 Interviewed by a journalist in 1975 for a lengthy piece about American retirees in Mexico, Jules, then 68 years of age, was described as having “iron gray hair, iron gray mustache curled at the corners; a deep booming voice” and an intense dislike of bureaucrats.

Peter Huf, who lived with his wife, Eunice Hunt, in Ajijic at that time and knew the Rubinsteins well, reflected that “Jules was a very mystical and vital painter, many of his works I think were at home in the Jewish tradition mixed with this magic influence of Mexico around us.” Huf also recalled that Jules often talked about “his old friend Bill back in New York”, a reference to the great Willem de Kooning, with whom Jules “had shared some great times and many discussions about art.” (Kooning also had links to two other artists inspired by Lake Chapala: Stanley Sourelis and Black American artist Arthur Monroe.) In the 1930s, Jules had also been great friends with Yasuo Kuniyoshi , Max Weber and Saul Baizerman.

After they left Ajijic in 1976, the Rubinsteins lived for a year in Israel before settling in Visalia, California.

Jules and his wife held a special exhibition at Riverside Municipal Museum in 1981. Entitled “Rubinstein and Rubinstein: Myth and Religion in American Expressionism,” the show featured 31 paintings from their personal collection.

An expressionist triptych on board work entitled “Sabath Candles” by Jules Rubinstein exceeded its estimate at auction at Freeman’s in 2002.

My thanks to Abby Rubinstein, Katie Goodridge Ingram and Peter Huf for sharing their memories of Jules Rubinstein with me.