The Black American artist Arthur Monroe, born in Brooklyn in 1935, grew up in New York and traveled in Mexico, before settling in California and becoming an integral part of the abstract expressionist movement of West Coast painters and poets. He lived and painted for three years in Ajijic in the early 1960s.

Monroe studied art and first encountered abstract impressionism (and its links to jazz) in New York, where he studied at Pratt Institute, the Brooklyn Museum Art School and City College. The East Village at the time was a “caldron of creativity stirred by poets, painters, sculptors and jazz musicians.” Monroe, whose studio was close to that of Willem De Kooning, became close friends with the famous jazz musician Charlie Parker. His love for jazz has never diminished.

Deciding that he needed to look at less traditional forms of visual art, and determined “to escape American racism and discrimination”, Monroe traveled to Mexico (and later to South America), where he became immersed in the rich spirituality and iconography of the ancient cultures: the Maya of the Yucatán Peninsula, the Zapotec and Mixtec of Oaxaca, and the Olmec of eastern Mexico.

From Mexico, Monroe returned to live in California, first in Big Sur and then in San Francisco, where he quickly became part of the legendary Beat Era of North Beach in the late 1950s. (Other Beat Era artists and authors with links to Lake Chapala include Al Young, Ned Polsky, Alexander Trocchi, Don Martin, Clayton Eshleman, Ernest Alexander, Jack Gilbert, ruth weiss, and Stanley Twardowicz). 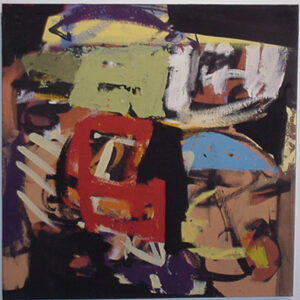 Monroe’s circle of Beat Era friends included painters Michael McCracken and Michael Bowen. The three painters shared a huge loft-studio relatively near Pier 23. Monroe had a Volkswagen Bug and avoided any parking issues by the simple expedient of driving into the elevator and storing his vehicle, when not in use, in the studio. Later, the trio of artists found themselves unable to meet the rent. Monroe put his works into storage and when that bill wasn’t paid, they were auctioned off: many of the paintings ended up in the hands of two Santa Cruz art collectors for a measly $400 in total.

Monroe’s interest in Mexico continued. In the early 1960s, as the Beat Era was drawing to a close, he was back in Mexico, living and painting for three years in Ajijic. It was in Ajijic that Monroe first met the poet and writer Al Young who also lived in California. In a 1969 newspaper interview, Young recalled that,

“At that time, Ajijic (near Guadalajara) was crammed with hippies … Arthur was one of the beatniks who had sort of lasted into the hippie era … The Mexicans loved him. They all called him by one name: Arturo. He was a very romantic figure, wearing the Mexican straw hat that the peasants wore. He was painting, and he was highly respected.”

In 1965, Monroe held an exhibition of his work at the Posada Ajijic, at the invitation of the inn’s manager Peter Spencer. In August 1965, Spencer announced that he would host a series of four solo shows in the hotel, each lasting two weeks, starting with Charles Littler (of the University of Arizona Art Department) and followed by Dick Poole, Arthur Monroe and John Thompson.

Back in California, Monroe continued to paint but took an establishment position as Registrar at the Oakland Museum. In addition, Monroe has taken an activist role in fighting to preserve indigenous petroglyphs scattered throughout California and has researched the history of African-American soldiers in World War II for a future book. 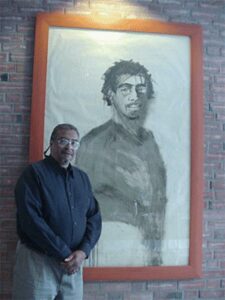 Arthur Monroe with a self-portrait.

As a painter, Monroe always remained an abstract expressionist, preferring to let his ideas emerge gradually on the canvas to having any pre-determined drawing guide what he wanted to portray. Some works have taken up to three years to complete as he continually seeks to convey new “visual truths”. His work was included in a group show at the Cabrillo College Gallery in 1969 to mark Black Culture Week. He has also exhibited at the Richmond Art Center and the Museum of the African Diaspora.

Monroe’s many one-person shows included an exhibition of large paintings at the Santa Cruz Art League’s Da Vinci Gallery in January 1991, the Don O’Melveny exhibition in December 2001, and the major show “The Inside of Now”, held at the Wiegand Gallery on the campus of Notre Dame de Namur University in Belmont, California, in 2006. A newspaper preview of the show described Monroe’s large-scale canvasses as “vibrant with rhythm and color”, “unplanned, improvisational works, created in the moment”. Al Young, then Poet Laureate of California, said of Monroe that, “With playful clarity and depth, he paints his emotional response to the wayward world — and always with loving spontaneity.”

Other posts related to Beat artists, poets and writers: