Romero’s father, an outspoken liberal, had been forced to leave the very conservative village of Cotija de la Paz, and the family home, and travel to Mexico City. Six months later, he sent for his wife and two children, Rubén (then aged seven) and his younger sister. Their journey, by horseback, steamer and train, is described in Romero’s Apuntes de un lugareño (trans: Notes of a Villager), published in 1932, by which time Romero was the Mexican Consul in Barcelona, Spain. He was later served as Mexican ambassador to Brazil (1937-1939) and Cuba (1939-1944). 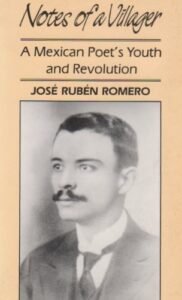 Besides his diplomatic career, Romero worked in a variety of fields, including journalism and as a university dean. He is best remembered, though, as a writer whose vivid depictions of the people and customs of his native state make him an outstanding exponent of the modern costumbrista novel. The costumbrista genre focuses on regional life, customs and manners.

Romero’s lasting legacy of fine works includes Desbandada (1936), El pueblo inocente (1934), Mi caballo, mi perro y mi rifle (1936), Viaje a Mazatlán (1946) and Rosenda (1946). But by far his best known book is the picaresque tale of a lovable rascal: La vida inútil de Pito Pérez (The Futile Life of Pito Pérez), first published in 1938. A best-seller in innumerable editions, this book was turned into a movie starring Ignacio López Tarso in the early 1970s. One of Mexico’s best-loved writers ever, Romero died on July 4, 1952, in Mexico City.

In his autobiographical novel Apuntes de un lugareño Romero describes Lake Chapala on two occasions. The first time he encounters the lake is in about 1897, on his way to Mexico City with his mother and sister at the age of seven. It includes Romero’s impressions of the steamer trip from La Palma to Ocotlán, a regular route at the time. Romero’s second encounter with Lake Chapala comes later, when he was living in Sahuayo between about 1907 and 1910.

The following extract from Apuntes de un lugareño, describing Romero’s impressions in 1897, is an excerpt of the much longer extract given, with commentary, in chapter 41 of my Lake Chapala Through the Ages, an Anthology of Travelers’ Tales:

At eight in the morning we got on the steamboat that would take us to Ocotlán.

I began to run around the boat without paying attention to the excessive cautions of my mother, who cried out for fear I would fall in the water.

The steamboat was large, with two decks and some cabins that on our voyage were occupied by the relatives of the owner, Don Diego Moreno, and some three or four nuns in black habits with white hoods.

During the crossing, the nuns never stopped praying and I twisted myself into every position to see if I could see their legs because I doubted that they had them like ordinary people.

Just past the halfway point in the lake a ruined tower appeared that was said to have been a prison in the old days. I straightened myself to see and began to pester all those within my reach with questions which when all was said and done, no one could answer.”

Translations of Romero’s works in English include:

Note: This is an updated version of a post first published 21 May 2014.