I would love to learn more about Charlotte Speight, aka “Mrs Melvin S. Wax,” who held an exhibit of paintings and drawings of Ajijic at the Carpenter Art galleries at Dartmouth College in Hanover, New Hampshire, in July 1947.

Charlotte Frances Speight (of British heritage) had married Melvin Sumner Wax the previous year and the couple had spent several months in Mexico as a wedding trip. 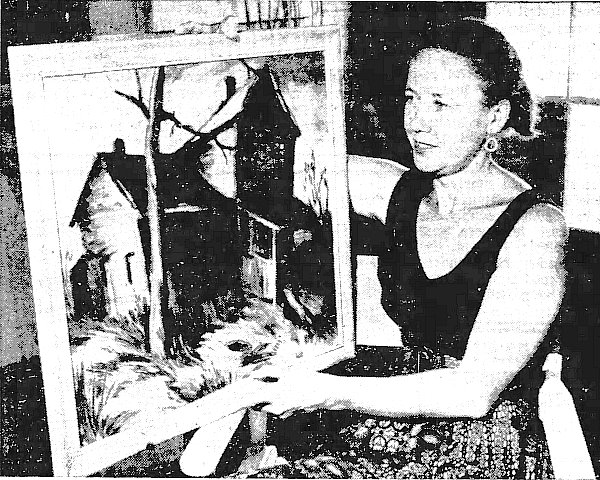 Born in Berkeley, California, on 15 April 1919, Charlotte graduated from George School in Bucks County, Pennsylvania, and then attended Swarthmore for a couple of years, before studying art in Paris, France. She also studied art at the Yale School of Fine Arts and the Cranbrook Academy of Art in Bloomfield Hills.

She married Melvin Wax, a journalist, on on 29 September 1946, and their daughter Martha Anne was born on 25 July the following year.

By the 1960s the family was living in Sausalito, California, where Charlotte taught art at Dominican Upper School for about four years and did set design and costumes for Sausalito Little Theater and the Marin Shakespeare Festival. At about the time her husband was elected mayor of Sausalito, Charlotte began studying sculpture at the San Francisco Art Institute, from where she graduated with a bachelor of fine arts degree in sculpture in 1967.

Please get in touch if you have any more information about this artist or examples of her work.