Ann (sometimes Anna) Sonia Medalie (1896-1991) was a muralist early in her career before becoming an outstanding painter of flowers and landscapes. During her six years in Mexico (1942-1948), Medalie made occasional trips back to San Francisco, but was actively painting in Ajijic on Lake Chapala for six months in 1944. American surrealist painter Sylvia Fein, who was living in Ajiijc at that time, has fond memories of Medalie, and greatly admired her artistic drive which, even then, enabled her to live from the proceeds of her artwork. 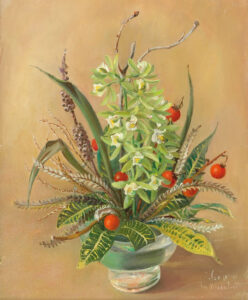 Medalie, born in Latvia on 17 April 1896, was the youngest of six children of Jacob and Beila (née Gluckman) Medalie. The family was forced to move to Lithuania when she was young. In 1921, after the first world war, the family emigrated to Chicago, where she studied briefly at the Art Institute of Chicago. Medalie also worked as a furniture decorator for more than a decade, first in Chicago, and then subsequently in Los Angeles (1928-1932) and finally San Francisco.

Paintings by Medalie were included in the shows of San Francisco Society of Women Artists (1937-41) and the San Francisco Art Association (1938-41).

In San Francisco, under the auspices of the Works Progress Administration, Medalie worked with sculptor Sargent Johnson (1888-1967) and was an assistant to Hilaire Hiler (1898-1966) on the colorful murals in the Maritime Museum. During San Francisco’s Golden Gate International Exposition in 1940, Medalie assisted Diego Rivera (1886-1957) on a mural at “Art in Action”, becoming good friends with both Rivera and his wife Frida Kahlo (1907-1954), and was also an assistant to Miguel Covarrubias when he was completing his incredible series of six murals (maps), the “Pageant of the Pacific“.

In 1942, Medalie moved to Mexico. While her precise itinerary is unknown, she spent six months or so in Ajijic in the latter half of 1944.

Medalie was one of the participating artists in a group show at the Villa Montecarlo in 1944 in Chapala, along with Sylvia Fein, Jaime López Bermudez, Otto Butterlin, Ernesto Butterlin (“Linares”), and Betty Binkley.

In November 1944, she was one of the many distinguished guests at the opening (at the same venue) of an exhibition of paintings by Edythe (Edith) Wallach. According to the Guadalajara daily El Informador, the guests included: Mr and Mrs Jack Bennett; Nigel Stansbury Millett and his father; Miss Neill James; Sr. Pablo García Hernández, representative of Teatro Mexicano del Arte; Mr Otto Butterlin and his lovely daughter Rita; Mr Witter Bynner, famous American poet; Mr Charles Stigel; Dr and Mrs Charles Halmos; Mrs George de Huton (sic); Miss Ann Medalie; Sr. Herbert Johnson and his wife, “and many more.” 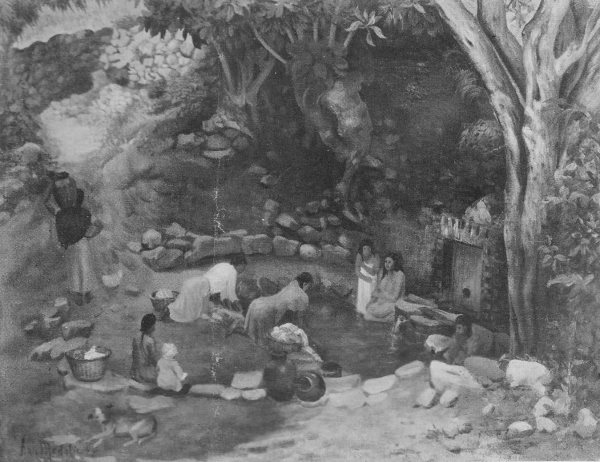 Two paintings by Medalie, “Net Fishermen (at Ajijic)” and “Washing Clothes – in Ajijic” were used as illustrations for Neill James’ article “I live in Ajijic!” in the October 1945 issue of Modern Mexico.

In early 1945, she held a solo exhibition in Mexico City at the Galeria de Arte Decoración (Venustiano Carranza #30). The list of works for that exhibition shows how significant her time painting in Ajijic had been, since several of the forty oils on show had clear links to Ajijic and Lake Chapala. For example she painted the garden at Quinta Johnson, as well as the view from Quinta Johnson. The Johnsons were long-time residents of Ajijic who had built their home and magnificent sub-tropical gardens on the lakefront. The originals of the two paintings used to illustrate Neill James’ article were also included in the show, along with a surrealist “Adam and Eve” and numerous realistic flower paintings. While Medalie did paint some surrealist works, she was best known for her exquisitely detailed and keenly observed flower paintings.

In 1948, Medalie left the Americas to live in South Africa. By 1951, she had moved to Israel, which became her home and studio for the remainder of her long, productive life. She was one of the founders of the artist community on Safed in Israel.

In her career as an artist, Ann Sonia Medalie held solo exhibitions in the U.S.A, Mexico, South Africa and Israel. She died in Tel Aviv, Israel, on 30 April 1991.