As we saw in previous posts, Rubén M. Campos, though now largely forgotten, was one of the major figures in Mexican literature in the first half of the twentieth century. Campos spent several vacations at Lake Chapala and made good use of his knowledge of the area’s history and geography in his acclaimed novel Claudio Oronoz. 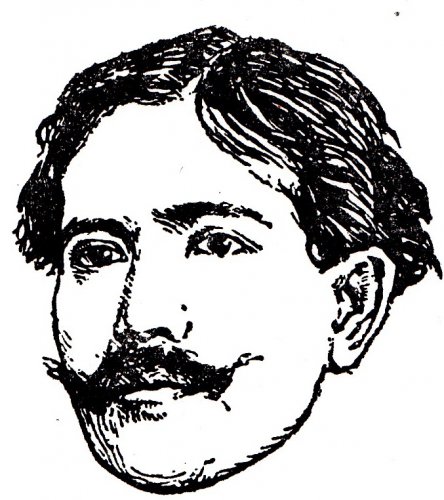 The parts of the novel that were set at Lake Chapala were, as Dulce Diana Aguirre López has shown, based on a straightforward, narrative account that Campos had originally published some years previously, as “En el Chapala”. “En el Chapala” was the second of three descriptive, factual pieces about Lake Chapala, published in La Patria in 1899, which we consider in this post. The first of his three short articles in 1899 was datelined “Chapala, 27 March”, the second “Chapala, 28 March”, and the third “Ocotlán, 28 March.”

The first piece describes the train ride from Mexico City to Tula, Irapuato (where the train remains for two hours allowing passengers to find an early breakfast) and La Barca, where  a “picturesque multitude” fills the station: two blind men playing guitars and singing, while fruit and vegetable sellers compete to sell their oranges, mameys, cucumbers and nopales, offering “the fruit at very low prices, without taking advantage of strangers of foreigners”.

The train then continued on to Ocotlán, arriving there by mid-day. There, Campos was met by his friend (and fellow poet)  Honorato Barrera and they took a streetcar across the town to the steamboat “Chapala”, which was moored in the River Santiago, awaiting the arrival of some important person from Mexico City and his family.

Within minutes, the steamboat was on Lake Chapala: “We entered the lake, amidst some of the most picturesque scenery imaginable, the largest lake in our beautiful country, and the lake whose horizons unite water and sky, surrounded by bluish-violet mountains with distant small fishing ports, barely distinguishable, even with a telescope: Jamay, Cojumatlán, Jocotepec, Tuxcueca, Tizapán – a parade of musical names that reach my ear on the fresh breeze…”

In the second article in the series – “En el Chapala” – Campos likens the movement of the steamboat to that of a serpent making its way through the water, and gives a lengthy, poetic description of the varied colors of the sky, lake and landscape, as seen from the steamboat. Campos expresses his emotions and marvels at his own feelings of enchantment as the sun goes down in the late afternoon, and the lake is bathed in moonlight as they reach the village of Chapala.

In his third article, Campos offers a much more detailed description of the village itself, starting with its position as a “small port, lost in a fold of the mountains that descends to kiss the surface of the lake”. Chapala, that has “a line of buildings that defends if from the lake breezes”, is only a small village at this time with “barely a fistful of houses on winding little streets that creep up the mountainside.”

The village does have some magnificent homes: “Suddenly, I find myself in a golden age. We wander up and down around the buildings that wealthy gentlemen have built here, starting with the English consul, Mr. Carden, who discovered this paradise.” Even though it is nighttime, Campos and his companions are invited to view several of these homes, clustered around a small bay. with their balconies, terraces and extensive gardens.

A few hours later, the party is ferried back out to the steamboat “Chapala”, lying at anchor some distance offshore, for the return journey to Ocotlán.