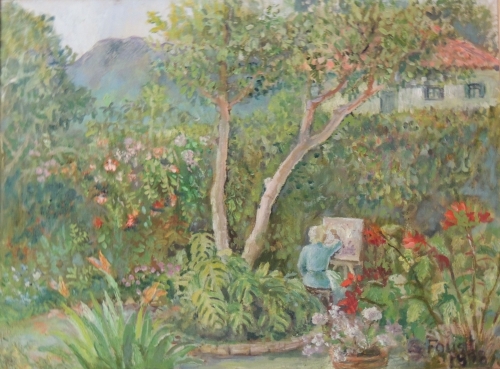 Auguste Killat Myckinn (her birthname) was born in Nemonin, East Prussia, on 15 February 1915 and died 05 October 2010. Even as a child, she was exceptionally talented at sketching and painting. At the age of 17, she entered the Königsberg Kunstakademie (Königsberg Academy of Arts), where she studied art and landscape, under Alfred Partikel (1888-1945) and Fritz Burmann (1892-1945). Foust continued her art studies at Dresden Art School and the University of Berlin Art School.

From about 1940 to 1947, she was married to the meticulous Dr. Wilhelm Graber, an economist of German heritage, who liked everything “just so”, in striking contrast to his wife’s preference to “go with the flow”.

In 1950, a few years after the end of the second world war, Gustel remarried. Viva E. Foust, her second husband, was serving in the U.S. Navy, and the couple settled initially in South Carolina, where Gustel became a naturalized U.S. citizen. Gustel had two children – Marlene and Sabina – from her first marriage and three more children – Barbara, Curtis and Karen – were born in the U.S.

From 1955 to 1958, the Fousts lived between Newport, Rhode Island and South Carolina, with Gustel exhibiting and teaching art in both places. She joined the Provincetown Art Association. In addition to group shows, several of which were in New York, she displayed her paintings in three solo shows and was represented by Sandpiper Gallery in Westport.

After her husband’s retirement from the Navy, in 1958 the couple decided to move to Mexico. While teaching art at the Art Institute in San Miguel de Allende, Gustel found renewed inspiration for her own art in the vivid colors and color contrasts found everywhere in Mexico and in Mexican popular art. Her work sold well at exhibitions in the Instituto Allende in San Miguel de Allende and attracted the attention of several Mexico City collectors who helped arrange for her to hold solo shows in the capital. These, too, proved very successful. 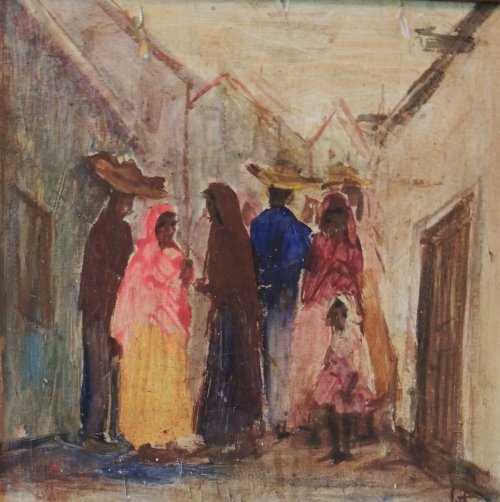 Five years later, the family moved to Guadalajara, where she continued to teach art and became a regular exhibitor in local galleries and further afield. For example, in 1964, she held a solo show of “batiks, portraits and watercolors” at the Castle Art gallery in Santa Cruz, California. Sadly, her husband passed away (in Guadalajara) that same year.

In September 1967, her work was in a group show of paintings at the Villa Montecarlo in Chapala. The following May, her “impressionist landscapes and portraits” were on show at the Tekare penthouse restaurant in Guadalajara. In October 1968 (when Mexico was hosting the Olympic Games), Foust had a show of original batiks at “Georg Originals”, a gallery in Guadalajara near the intersection of Avenida Chapultepec and Vallarta, and was simultaneously showing paintings and batiks at Villa del Lago hotel in Ajijic. Her next showing of paintings, at the Galeria Municipal de Arte y Cultura in Guadalajara was favorably reviewed in an illustrated half-page article by well-known local art critic J. Luis Meza-India.

She then had three oil paintings accepted into a major, juried group show of American Artists at the Instituto Cultural Mexicano Norteamericano de Jalisco in Guadalajara in June 1969, and won third place for figurative painting. The show featured 94 works by 42 U.S. artists from Guadalajara, the Lake Chapala area and San Miguel de Allende. 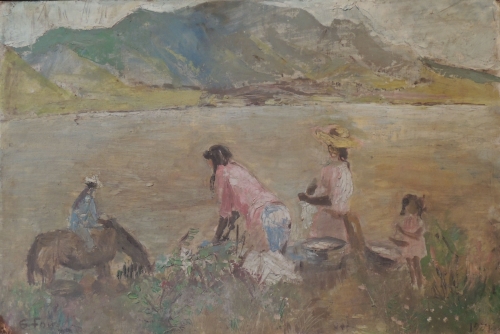 In 1972, part-way through her fifteen years living in Guadalajara, she spent some time in Houston, Texas. Her Houston studio was at 713 Snover, and she held a solo exhibit at the Hotel Fiesta in Houston from 19 to 23 May. The formal invitation for the exhibit featured two paintings: “La Playa en Puerto Vallarta” (Puerto Vallarta Beach) and “Escena del lago Chapala” (Lake Chapala Scene). According to the short artist biography published at the time, Foust had already held eight solo shows in Mexico, as well as one-person exhibits in Santa Cruz, California; Forth Worth, Texas; and New Braunsfels, Texas. (If anyone has details of these exhibits, please share!) 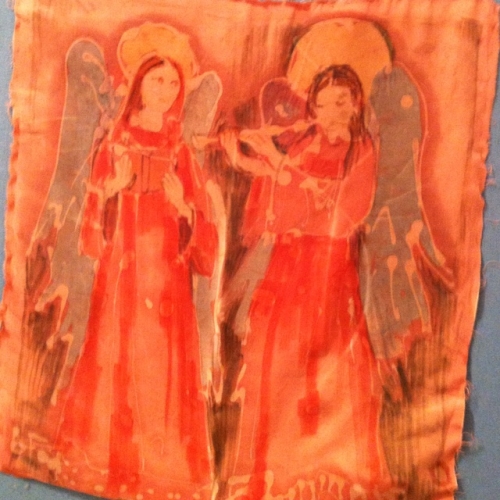 It is obvious that Foust was extremely familiar with the Lake Chapala area well before moving to live in Ajijic in 1978, and no surprise that soon after moving there, one of her street scenes of Ajijic (in the collection of local realtor Richard Tingen) was chosen for the annual, charity fundraising Amigos del Lago greeting card. 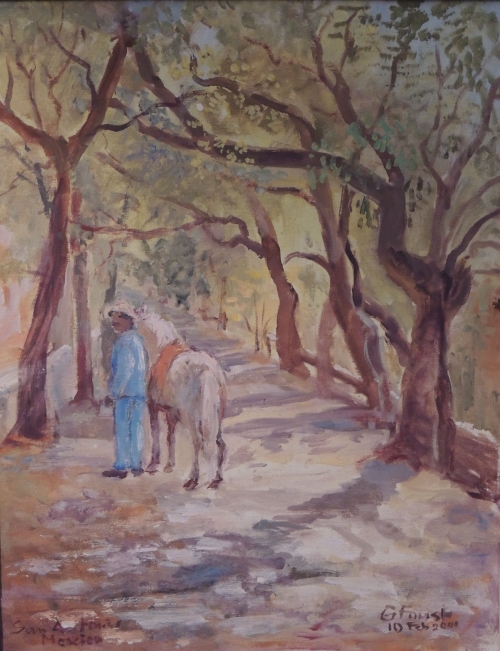 In the late 1970s, early 1980s, Foust exhibited several times in Acapulco, at the city’s Biennales held in a major hotel on the main beach. These shows were fund-raisers to benefit the children of Acapulco. Among the organizers was Ann Goldfarb, a friend of Foust’s. Foust’s son, Curtis, attended one of these shows and recalls that his mother’s paintings quickly sold out, snapped up by visitors from the U.S., Canada and Europe.

Even after her return to live in the U.S., Foust retained some close links to Lake Chapala. In 1992, for example, Judy Eager was able to persuade her to exhibit (with her daughter Barbara) a selection of batiks, oils and watercolors at La Nueva Posada hotel in Ajijic.

As these illustrations show, Gustel Foust was an extremely talented artist, whether of landscapes, portraits or batiks. She was also a prolific artist, painting almost every day of her life, in a wide variety of styles and using many different media. At different times, she signed her work Gustel K. Foust, Gustel Foust, G. Foust, and sometimes simply G.F. On some occasions, the cross stroke of the “T” in Foust would be omitted or unclear.

Foust’s art can be found in many museum and private collections around the world, including the Centro de Arte Moderno (Museo Miguel Aldana) in Guadalajara and the East Prussian State Museum in Germany.

All four of Foust’s daughters became painters, while her only son, Curtis, maintains an informative website dedicated to his mother’s art.

All illustrations are reproduced by kind permission of Curtis Foust; my sincere thanks to him for generously sharing details of his mother’s life and work. To see more of her paintings and batiks, please visit the Gustel Foust website.

If you are able to provide more specific details (dates, gallery names) of Gustel Foust’s art exhibitions, especially those in Mexico, Germany and the U.S. please email us or use the comments feature at the bottom of individual posts.