Writer, actor and cinematographer William Colfax Miller (1911-1995) had worked in the film industry in Hollywood and Mexico, before he moved to Lake Chapala with his third wife, Virginia Downs Miller (1914-2005), in the early 1980s.

Miller was born on 29 May 1911 in South Dakota. He moved to Chicago after graduating from high school in 1928 to attend the Armour Institute of Technology where he majored in chemical engineering. 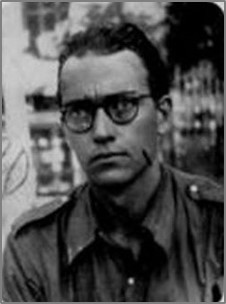 His interest in the film industry soon took him to Hollywood where he worked for several movie studios until January 1938 when he left the U.S. to go to Europe and fight in the Spanish Civil War. While participating in the 3,000-strong Abraham Lincoln Brigade of American volunteers fighting fascism in the Battle of the Ebro, Miller was diagnosed with tuberculosis and removed from combat. He returned to the U.S. a year later, after working on a war documentary for the Spanish Communist Party’s film office.

Later in life, Miller claimed to have left the U.S. in 1939 because he was a Marxist, and was therefore no longer welcomed in Hollywood. He decided to move to Mexico because he had heard that, having being a commander with the Lincoln Brigade, he could be made a General in the Mexican Army. This turned out not to be true, but Miller remained in Mexico anyway. Miller’s claim to have been a commander in Spain was equally untrue; this was a classic cross-border promotion. While not in any way diminishing Miller’s contribution to the Spanish Civil War, the archives of the Abraham Lincoln Brigade show that Miller’s rank in the volunteers never rose above “soldado”, the lowest rank possible.

Equally, Diana Anhalt relates in her book about American political expatriates in Mexico how Miller wrote to her a few years before he died claiming personal involvement in the first attempt on Trotsky’s life in Mexico City in May 1940, an attempt led by artist David Alfaro Siqueiros who later became a personal friend of Miller and his third wife. However, when Anhalt phoned Miller to double-check the details, he back-tracked on this claim and admitted that he “had never actually participated in the attempt but, yes, he had known about it”.

Soon after he moved to Mexico, Miller met then-president Lázaro Cárdenas who hired him as his official photographer to film a series of short documentaries during the final year of his administration. Miller then began combining work as a cinematographer with roles in acting and directing.

Miller claimed to have participated in more than 150 films in Mexico; this may or may not be an exaggeration. Unfortunately, for some of the claims made in earlier biographies, independent corroboration is lacking. It has proved impossible to verify, for example, the claim made in regard to Forgotten Village (1941) that “Bill commandeered an entire village, persuading the people to be photographed and adapting the script.” (El Ojo del Lago, July 1989).

As an actor, Miller apparently appeared in Soy Puro Mexicano (1942) and Espionaje en el Golfo (1943). He worked behind the camera on Luis Buñuel’s Subida al Cielo (1951) and was assistant director on the the award-winning documentary Walls of Fire (1971). Miller was also one of the photographers employed to work on a documentary film given the working title of The Spanish Republicans In Mexico. While it is unclear if this film was ever completed, the Brownsville Herald in November 1943 reported that Miller’s specialist contribution to this project was “agricultural documentary photography” to complement the “industrial photography” supplied by Walter Reuter, a well-known German photographer who was resident in Mexico City.

Miller was credited as “Technical Director” for the satirical comedy El Brazo Fuerte (1957), filmed by Walter Reuter in the picturesque small village of Erongaricuaro on the shores of Lake Pátzcuaro. This film won prizes at the Cannes Film Festival but was not released in Mexico until 1975.

Miller also apparently worked with Pathé Newsreel, published a Mexican Motion Picture Directory and recorded numerous talking books, as well as being appointed Director of Cinephotography for the Mexico City Olympics in 1968.

Miller was married three times. His first marriage, in Hollywood in 1932 to Ruth Elizabeth Timberlake (1911-1940), ended with her death in 1940; they had one daughter. In 1948, Miller married Roseann Sparks (1923-1968) in Atizapan de Zaragoza on the outskirts of Mexico City in 1948; they lived in Cuernavaca and had a son and two daughters. In November 1969, a year after he lost his second wife, Miller married Virginia Downs. The couple lived in Cuernavaca and opened the Akari Gallery, the city’s first major art gallery, before moving to Lake Chapala.

Among the other “Ajijicans” attending the opening in Cuernavaca were Peggy Koll, Margo Thomas, and Bruce and Patricia Wightman.