Just who was Janet M. Cummings? I’ve managed to find out very little about this photographer despite the fact that she was one of the earliest female photographers to have several of her photographs published in National Geographic and she also had photos accepted by such august newspapers as the New York Times. 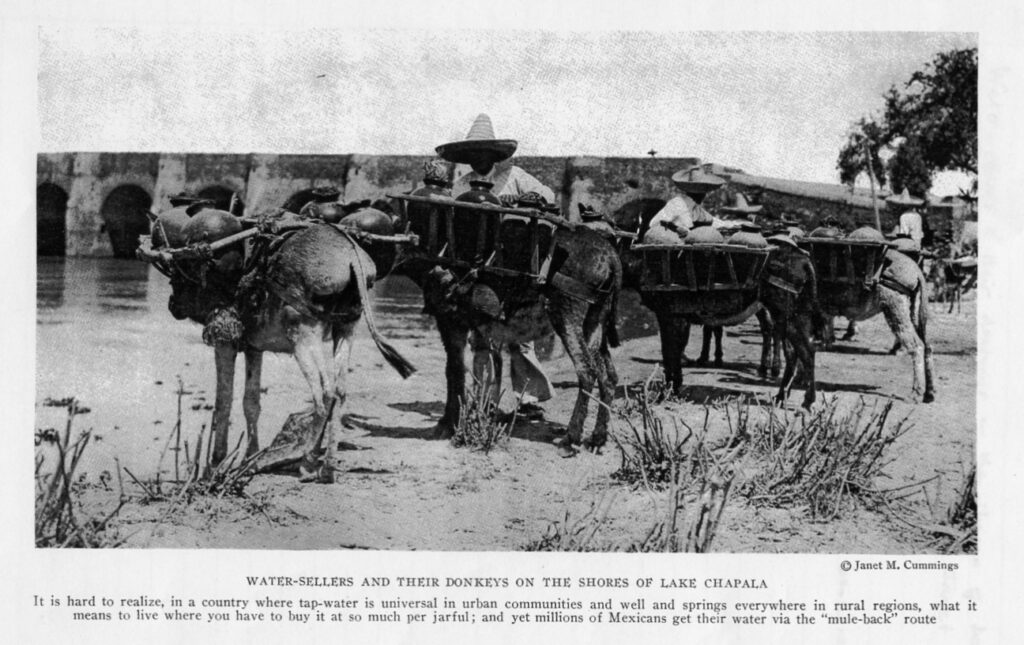 One of her National Geographic photos, published in July 1916, is entitled “Water sellers and their donkeys on the shores of Lake Chapala”. It appears to have been taken in Ocotlán (near the then-famed Ribera Castellanos hotel) and shows people collecting water from the lake to sell. The photo has a long bridge in the background, hence the suggestion that it was taken near Ocotlán.

Janet M. Cummings stamped many of her photos with the address of her studio at 70, Fifth Avenue, New York City, and was most active as a photographer between 1915 and 1920.

She took an iconic image in 1915, published in the New York Times of the beach at Southampton in England, of “German prisoners captured in the recent British offensive in France”. The same newspaper also published photos taken by her captioned “Veterans of the London National Guard, Composed of Business Men Organized for Home Defense, Giving a Parade at Brighton, England’s Noted Seaside Resort” and “German Soldier Putting a Keener Edge on His Sword” (both published in the 25 April 1915 edition).

In 1916, besides photographing Lake Chapala, she took other photos in Mexico, including one of the Rio Grijalva in southern Mexico. In 1917, she was working in Australia, taking pictures of the state of Victoria and elsewhere. She is also known to have photographed Beirut and several other locations.

Sadly, beyond this, I have yet to learn more about the life and work of this early female photographer who brought Lake Chapala to the attention of the American public almost thirty years before the lake was visited by another pioneering female National Geographic photographer, Dorothy Hosmer, who visited Ajijic in 1945.