Born in about 1958 in Saskatchewan, Canada, to a musical couple from Poland, Ledwon studied Fine Arts at University of Alberta, but apparently became disillusioned by professors who told him he’d never make it in his chosen field. He traveled to Europe. On his return to Canada, he studied graphic design at Grant MacEwan Art College (Edmonton, Alberta) and at Fredericton College. 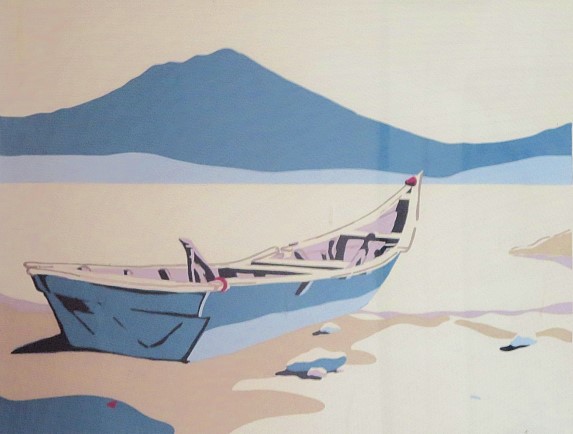 Ledwon then worked for Air Canada (Latin America and Caribbean) and as a freelance graphic artist. He visited Jocotepec in the early 1980s to meet artist-photographer John Frost (on the recommendation of a mutual friend), and then worked with both John Frost, and also with Georg Rauch, another Jocotepec-based artist, for almost two years. During this time, he developed silk screen and other techniques. After returning to Canada, he worked as a picture framer at an art gallery, but returned to Jocotepec later that year to work on silkscreens and paintings, primarily of flowers and architecture.

In 1985, his silkscreens (example above) were regularly exhibited in the Posada Ajijic and sold well. While Ledwon’s early silkscreens were somewhat derivative of the designs of his mentor Georg Rauch, his later work, especially when depicting women in Michoacán, was more original.

When he returned permanently to Canada, in his early thirties, and was living in Ottawa, Ledwon decorated the ‘Envirobus’ (see image), which was used to promote local environmental groups and environmentally oriented businesses, such as organic farmers and recycling companies. The bus itself was a moving mural, painted to represent Ledwon’s impression of forests from all over the Americas.

In more recent years, Ledwon has resided in the Slocan Valley in B.C., Canada, built (and taught how to build) unique strawbale houses in several countries, tended organic gardens, and taught about the raw food diet, while practicing Qigong.

This is an updated version of a post first published 22 March 2012.