Brooklyn-born photographer Louis Stettner, one of the greatest U.S. photographers of all time, died in 2016 at the age of 93. The largest retrospective of his work to date – entitled “Traveling Light” – opened at the San Francisco Museum of Modern Art in 2018 and closes in June this year. It includes three photographs of Lake Chapala and its fisherfolk taken in 1956. 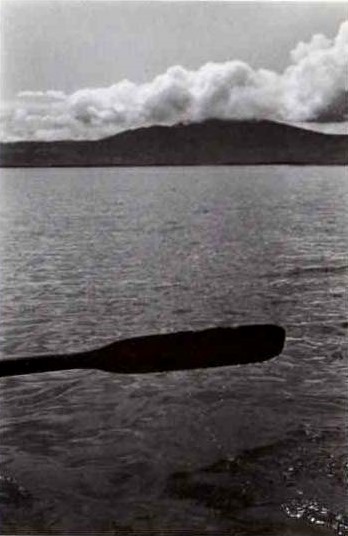 Among them is this photograph of an oar silhouetted against Lake Chapala, an image that was reproduced at least once as a postcard. Stettner had a twin brother, and Sally Katz, assistant curator of photography at SFMoMA, makes a strong case that this influenced, whether consciously or unconsciously, much of his work. She points out, in her Instagram walkthrough “Being double“, that many of Stettner’s photographs show a “strong doubling effect, both literally and poetically.” In this case, the oar helps to establish this duality.

It should be noted that in 1956 Lake Chapala was just recovering from a severe drought. The lake’s level in summer 1955 was the lowest on record (and has never been equaled since).

Louis Stettner was born in New York on 7 November 1922 to Austrian immigrant parents. He became fascinated by photography as a teenager, was given a Box Brownie by his parents, and joined the Photo League in 1939 to take a basic technique course, the only formal photography lessons he ever took.

Throughout his career, he always printed his own work and gained renown for his consummate technical skills. He formed friendships with, and was encouraged by, some of the most noteworthy photographers of the time, including Paul Strand and Alfred Steiglitz.

Stettner served in the U.S. Army from 1941 to 1945, including stints as a combat photographer in New Guinea, the Philippines and Japan. On his return to New York, he taught the basic course at the Photo League and began to photograph New York subways.

Between 1947 and 1952 he lived in Paris, France. He was commissioned to collect prints for the first exhibition of contemporary French photography in the U.S. in 1948 at the Photo League’s gallery. In 1949, he held his first solo exhibit at the Bibliotheque Nationale in Paris and was a prize winner in Life’s Young Photographers Contest. He accumulated an extensive portfolio of Parisian photographs and also studied film-making.

For the next six years, he worked as a freelance photographer for magazines such as Life, Time, Fortune, Paris-Match and National Geographic, with frequent trips overseas to take photographs in Paris, Greece, Spain, Portugal, Holland and Mexico. It is unclear how long he was in Mexico in 1956; please contact me if you can offer more information about his time in Mexico.

From 1958 to 1962 he returned to Paris to continue his freelance work. In the 1970s he was appointed Professor of Photography at CW Post Center, Long Island University. During this period he frequently gave lectures at other institutions. In 1975 he was awarded first prize in the Pravda World Contest and spent six weeks working in the then-Soviet Union.

In 1990, Stettner moved permanently to Paris, France, to photograph, paint, and sculpt. He returned regularly to New York and began taking color photographs during summer visits. He was awarded the Chevalier de l’ordre des Arts et des Lettres medal in 2001 and honored with a retrospective exhibition at the Bibliothèque Nationale in Paris in 2012. He died in Paris on 13 October 2016, at the age of ninety-three.

Note
The image of Lake Chapala reproduced here comes from a postcard offered on the auction site, Delcampe in April 2019.

My sincere thanks to Jorge Varela Martinez Negrete and his daughter Sofía for bringing this exhibit to my attention.