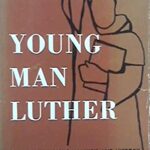 Erik Homburger Erikson (1902-1994), who coined the term ‘identity crisis’, spent several weeks in Ajijic in 1957 while writing Young Man Luther: A Study in Psychoanalyses and History, published the following year. Erikson had been persuaded that Ajijic was a quiet place in which to write by Helen Kirtland and her husband Dr Larry Hartmus. […] 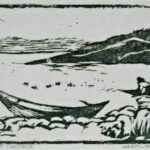 Noted American artist Hazel Hannell was already in her eighties when she chose to spend the winter months in Ajijic. Hannell became a regular visitor for several years in the 1980s. This charming costumbrista woodblock from those years was sold on eBay. Hannell continued to paint and produce artworks until she was 103 years old. […] 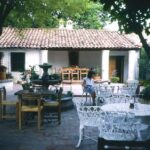 Photo of the interior of La Quinta in January 1983

The accomplished and enigmatic artist John Thompson (1929-1988) lived in Jocotepec from about 1963 to 1968. Born in Cincinnati, Ohio, on 20 July 1929, Thompson landed in Jocotepec by chance, having accepted a ride to Mexico with Miriam Bisbee, who was on her way to visit friends there: Peter and Nancy Spencer then managing the […] 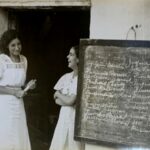 The following excerpts come from the detailed account written by Dr. Leo Leonidas Stanley (1886-1976) after visiting Lake Chapala in October 1937. (For ease of reading, accents and italics have been added and spelling standardized.) Note that early descriptions (in English or Spanish) of the villages on the south shore of the lake are exceedingly […] 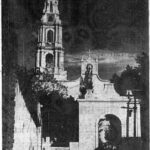 Edgar Mitchell Ellinger junior was in his mid-forties in 1953 when he wrote about “the small, captivating town of Ajijic” for the Arizona Republic under the title, “Mexican Town Offers Peaceful Way of Life.” Ellinger was born in New York on Christmas Day 1906. After attending Horace Mann School for Boys, he became a Wall […] 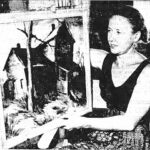 I would love to learn more about Charlotte Speight, aka “Mrs Melvin S. Wax,” who held an exhibit of paintings and drawings of Ajijic at the Carpenter Art galleries at Dartmouth College in Hanover, New Hampshire, in July 1947. The exhibition included “six oils, several pen and ink sketches and a gouache, depicting scenes in […] 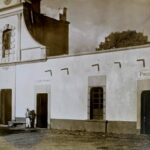 The following excerpts come from the detailed account written by Dr. Leo Leonidas Stanley (1886-1976) after visiting Lake Chapala in October 1937. (For ease of reading, accents and italics have been added and spelling standardized.) On 11 October, Stanley and his two Mexican companions, José Alonzo and Ramón, rode from Chapala to Jocotepec, where they […] 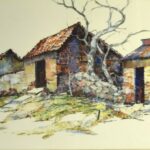 Little is known about Albert Alfredson’s visit to Lake Chapala, though a realist oil and crayon painting by him entitled “Humble Homes” with the notation “At Lake Chapala Mex,” and believed to date from about 1950, was offered for sale on eBay in July 2021. Alfredson was born in Chicago, Illinois, in 1907 and died […] 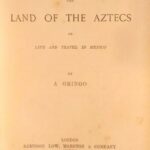 “A Gringo”—an English-speaking traveler about whom very little is known—arrived in Mexico in 1883. He was an observant and enthusiastic visitor. In the preface to his book Through The Land of the Aztecs or Life and Travel in Mexico (published in 1892), “A Gringo” states that his objective “is simply to give a plain account […] 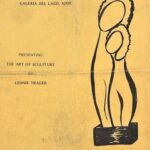 Austrian sculptor Leonie Trager lived and worked in the Lake Chapala area in the early 1970s. She held a solo exhibition in the Galería del Lago, Ajijic, in 1973, when she was living in Chula Vista (mid-way between Ajijic and Chapala). The catalog for that exhibition includes a brief biography stating that she had graduated […] 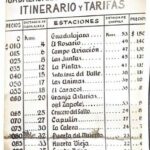 Dr. Leo Leonidas Stanley (1886-1976) visited Guadalajara and Lake Chapala in October 1937 and kept a detailed diary of his trip. Stanley was the physician for the California State Prison at San Quentin from 1913 to 1951, and was a meticulous observer. Fortunately for us, his detailed typewritten account of his trip, illustrated by dozens […] 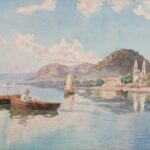 German painter Paul “Pablo” Fischer lived in Mexico for many years and painted at least two watercolors of Lake Chapala. Fischer (1864-1932) was born in Stuttgart, Germany, and earned a medical degree at the University of Munich in 1884. He traveled to Mexico in about 1890 to administer an inheritance in the northern Mexico state […] 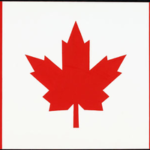 For those Canadians who celebrate 1 July as Canada Day, here is a list of Canadian artists and authors who have historical connections to Lake Chapala and who have already been profiled on this blog. Enjoy! Visual artists Henry Sandham (1842-1910), a well-known Canadian illustrator of the time, illustrated Charles Embree‘s historical novel, A Dream […] 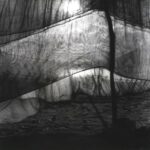 Prior to becoming a noted abstract expressionist painter, Stanley Twardowicz (1917-2008) lived in Ajijic in about 1948. Three years later, he exhibited about twenty photographs from that visit in New York, and won instant acclaim as a talented fine arts photographer. Remarkably, Twardowicz had only taken up photography a short time before arriving in Ajijic, […] 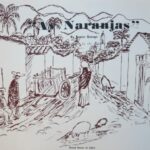 Born on 18 January 1924 in Berlin, Germany, artist Renée George (birth name Renate Judith Georg) emigrated to the US as a stateless fifteen-year-old in August 1939, just as the second world war broke out in Europe. George visited Ajijic during her three month trip to Mexico in the summer of 1947. When she returned […] 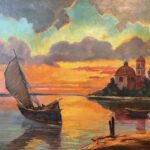 This scenic view was painted in 1911 by Austrian artist August Lohr (1842-1920). August Lohr : his life and connection to Lake Chapala Lohr lived in Mexico City for almost thirty years. He undertook commissions, including interior decorations and murals, and is known to have traveled to many other locations to paint. This painting (above) […] 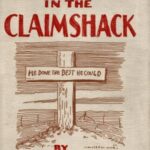 New York-born author John Sinclair was already the successful author of a “Western cowboy” novel, published by MacMillan, when he decided to hide out in Ajijic for a few weeks in 1946-47 to write his next novel. According to a newspaper article in December 1946, Sinclair planned to: “write another novel in Ajijic, which is […] 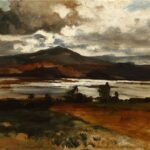 August Lohr was an Austrian landscape artist, born in 1842 in Hallein, near Salzburg. Lohr lived and worked in Europe, the U.S. and Mexico. After studying at the Royal Academy of Fine Arts in Munich, Germany, Lohr initially specialized in painting Alpine scenery. He and his Austrian wife, Franziska Geuhs, had three daughters, Rosina, Elise […] 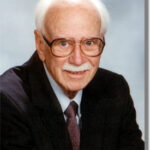 American composer and conductor H. Owen Reed (1910-2014), a professor at Michigan State University, spent five months in Mexico over the winter of 1948-49. After several weeks in Mexico City and Cuernavaca, with side trips to Taxco and Acapulco, he spent a couple of months in Chapala. This trip, funded by a Guggenheim Fellowship, was […]