Synnove (Shaffer) Pettersen (born in Norway in 1944) is a much sought-after portrait painter who lived in the Lake Chapala area from early 1973 to August 1976.

In 1956, while Pettersen was still a young girl, her family moved to Canada, to Victoria, B.C.. Four years later, they moved on to Los Angeles, though Pettersen remained in Victoria, where she was crowned Miss Victoria in 1962, and graduated from high school in 1963. She has fond memories of her high school art teacher, Mrs Francis Cameron, saying, “She was the best. I’ve since talked with fellow art students and we all agree what a treasure she was and how we really had a college type art program.”

Pettersen then won a scholarship to the Art Center College of Design in Los Angeles. She remains unconvinced by the education she received there, because it stressed the abstract movements, rather than the realism that she has made her specialty.

In 1973, her then husband took early retirement and  decided to move south of the border. They had heard about Ajijic, “the largest retirement community outside the U.S.”, the year before while visiting Puerto Angel on the coast of Oaxaca. At Lake Chapala, the couple lived for a short time in Jocotepec before moving to Ajijic when they met, by chance, in the Ajijic post office, a couple about to relinquish their lease on a home in the village.

Her artistic talents, and the promise of her later success, are clearly evident in the charcoal drawings and paintings she completed during her three years in Mexico (see short videos).

The shows of Clique Ajijic included:

Pettersen says that the Clique Ajijic group, “never painted together as a group, just had shows.” She added that one additional benefit of the drawing sessions she had at her house, where she able to persuade neighboring ladies to pose for her, was that they helped her learn Spanish.

In April 1976, Synnove (Shaffer) had a solo exhibit of works done in Mexico – oils, pastels and drawings – in the Villa Montecarlo in Chapala. The show opened on 25 April. 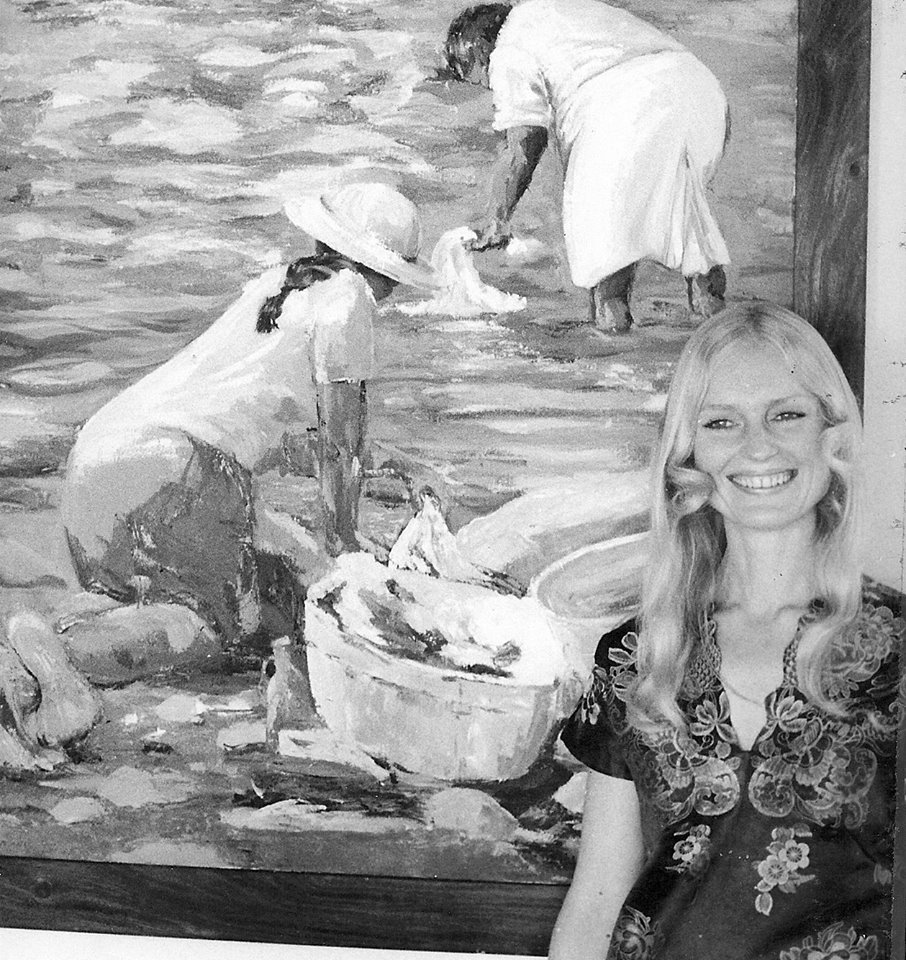 Synnove Pettersen with one of her paintings, ca 1975 (Photo by John Frost)

In this early stage of her artistic career, Pettersen was greatly encouraged by fellow Clique Ajijic member Sidney (“Sid”) Schwartzman, and by artist-photographer John Frost, who was not a member of the Clique Ajijic but took their publicity photos. In an email, she wrote that, “John Frost was a big inspiration. So willing to share his knowledge. When I returned to L.A., I did several silkscreen (serigraph) pieces. He had refreshed my interest with his enthusiasm for a photo/sun process but I was not successful with that technique, so returned to the touche and glue method.”

Synnove Pettersen is now based in Shelton, Washington state, where she continues to undertake portrait commissions. Her Facebook page, with numerous examples of her powerful, evocative portraits, is Synnove Fine Art. Prints and originals can be purchased direct from the artist’s website.

Sincere thanks to Synnove Pettersen for her willingness to share memories, knowledge and mementos from her time in Mexico.