The Clique Ajijic was a group of eight varied and talented artists who formed a loosely-organized collective for three or four years in the mid-1970s. One of the members, Synnove Pettersen, recalls that “We never painted together as a group, just had shows.” Another member, the late Tom Faloon, once commented to me that Kate Karns, the wife of Todd Karns, sometimes posed for the artists in Clique Ajijic. 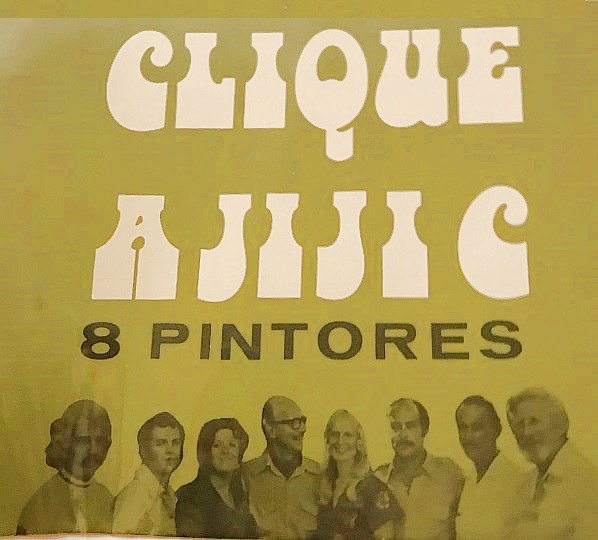 The eight artists in the Clique Ajijic were (below, left to right): Sidney Schwartzman, Adolfo Riestra, Gail Michel (aka Gail Michaels), Hubert Harmon, Synnove (Shaffer) Pettersen, Tom Faloon, Todd (“Rocky”) Karns, and John Peterson (the only member of Clique Ajijic who had been a member of the earlier Grupo 68). 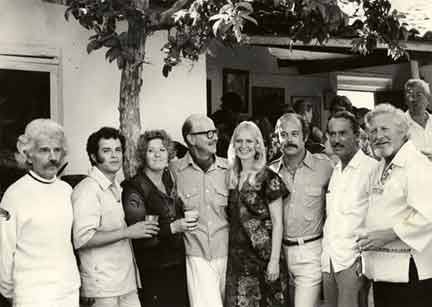 The group’s first shows were organized by Katie Goodridge Ingram who ran the Galería del Lago art gallery, located at that time on the main highway in Ajijic.  The shows of Clique Ajijic included:

By the end of the year, two of the original 8 artists of Clique Ajijic had left the village – Pettersen to the U.S. and Riestra to Tepoztlán (Morelos) – and the remaining members had added Richard Frush to their number. David Olof is also mentioned in one list of artists at the following show: 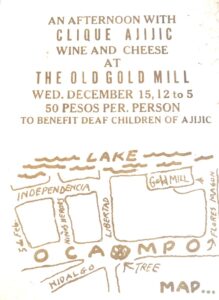 The Clique Ajijic auction of artwork held at Posada Ajijic in February 1977 included works by Richard Frush, Tod Karns, John Peterson, Gail Michel and Hubert Harmon raised $24,000 pesos, “of which 10% went to help children in treatment and training at the Hearing Improvement Center in Jocotepec.” The auctioneer was popular Posada Ajijic hotelier Morley Eager, who gave 10% of all the pesos paid for drinks to the same cause.

In December 1977, another art exhibit of Clique Ajijic work, which proved to be the final throw of the dice for the group, was presented at the Posada Ajijic. The advert for this exhibit stated that the Clique had 9 members, presumably still including Pettersen and Riestro who had left the previous year.

Note: This is an updated version of a post first published on 4 May 2015.