American artists Paul Charles Hachten (born 1934) and his then wife Cynthia “Casey” Siddons Jones lived in Ajijic from 1968 to 1969, following their marriage on Valentine’s Day 1968. However, Hachten was still listed in a  local newspaper in April 1971 as having a studio in Ajijic, at Independencia #28.

Peter Huf, who was living in Ajijic at the time, recalls that the Hachtens did not exhibit very much at all, though we do know that Paul Hachten was one of several Lakeside artists whose work was included in the First Annual Graphic Arts Show, which opened 5 June 1968, at La Galeria (Ocho de Julio #878, Guadalajara). Allyn Hunt described his works as “subtle excellent prints, the best being “Mr. Fields.” (Guadalajara Reporter, 15 June 1968)

A few months later, one of Hachten’s works, an acrylic entitled “Blue Blue”, was chosen for inclusion in the 1969 Semana Cultural Americana – American Artists’ Exhibit – which ran at the Instituto Cultural Mexicano Norteamericano de Jalisco (Tolsa #300, Guadalajara) from 27 June 1969 to 4 July. This juried, group show included works by 42 U.S. artists (94 works in all) from Guadalajara, the Lake area and San Miguel de Allende.

At the time, Peter Huf was uncertain about the quality of Hachten’s art, but has since become convinced that it was actually way ahead of its time:

“I remember one time some of us went to his studio and he was putting the paint on some large canvas with a very wet sponge. We laughed about it, but when I think about it now, somehow he was far ahead of us all. I still have an etching of his which is very sensitive.”

One of Hachten’s painting from this time, Parsubin (1970) was acquired by the Dallas Museum of Art, and is now in its permanent collection. Parsubin is a color serigraph on aluminum with overall dimensions of 27 x 24 1/4 inches  (68.58 x 61.59 cm). It was included in a companion exhibition to a Jackson Pollock mural (Hornets Nest) at the Des Moines Art Center in 2012 as one representative of works influenced by the Abstract Expressionist (Ab-Ex) movement. 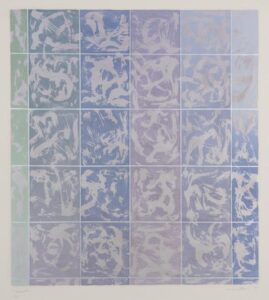 Amy N. Worthen, the Des Moines Art Center’s Curator of Prints and Drawings, explained in a presentation (reported afterwards by Heath Lee) that the cool and more impersonal 1960s Pop Art eventually came along and quenched some of the fire and heat of the Ab-Ex movement. She thought this was perhaps best illustrated by Paul Hachten’s print, Parasubin (1970), which seems to cage up the energy of Ab-Ex art with its orderly grids. Describing Parasubin‘s colors as “opalescent and unnatural”, Worthen pointed to this piece as an example of the “last gasp” of Ab-Ex style and an example of the inevitable overlap between art movements. In her view, by 1970, “Abstract Expressionism, now subdued and tamed, has lost its sting.”

Hachten’s parents lived in Buffalo, New York, and Hachten studied art at New York University and (from 1958) at the University of California at Berkeley. At the time of his marriage to Cynthia Siddons Jones in Mendocino, California, in 1968, he had a studio in the town, and the couple apparently planned to live there, but chose to move to Mexico instead. They spent the next year living and painting in Ajijic.

We have yet to learn more about Paul Hachten, beyond a report in the New Mexican, a Santa Fe newspaper, in July 1972 that “Paul Hatchen” (sic) was holding an exhibition of “graphics at the opening of his new gallery”. Hachten has rarely exhibited and currently lives in Seal Beach, in San Francisco.

[It appears to be complete coincidence that the surname Hatchen was used by the novelist Ross Macdonald for a married couple, Dr Keith and Mrs Pauline Hatchen, in The Zebra-Striped Hearse (1962), a book partially set in Ajijic.]

This is an updated version of a post first published on 21 April 2016. If you can add to this skeleton biography, please get in touch.