Born in Cincinnati, Ohio, on 20 July 1929, Thompson landed in Jocotepec by chance, having accepted a ride to Mexico with Miriam Bisbee, who was on her way to visit friends there: Peter and Nancy Spencer then managing the La Quinta hotel. (Apparently, Miriam was completely besotted with Nancy and hoped to tear her away from Peter! She was only partially successful; the Spencers later ran Posada Ajijic for a short time before returning to the US “for personal reasons” in September 1965.) 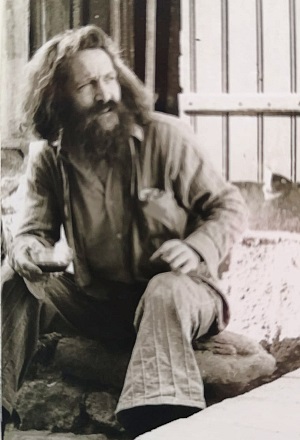 When photographer John Frost and his wife, novelist Joan Van Every Frost, first arrived in Jocotepec in 1966, they learned that John Thompson was considered the painter in the town. Thompson had left working for the defense industry in southern California, and his wife, to live in Jocotepec, where he rented a place across the street from the historic La Quinta Inn.

Thompson became a good friend of the Frosts and of several other artistic Jocotepec residents, including painter and muralist Tom Brudenell, and photographer Helmuth Wellenhoffer and his wife, Antonia. Thompson was also good friends with Peter Paul Huf and his wife, Eunice (Hunt) Huf, who lived in Ajijic from 1967 to 1972.

Thompson was able to subsist in Jocotepec only because he had two small trust funds which gave him a combined $40 a month to live on. This was supplemented by the occasional check from the US: before he left, he had sold several paintings by offering purchasers the chance to pay in installments, provided they sent the funds to Mexico.

Quoting John Frost, Thompson—and his then girlfriend, Gertha—were “pillars of the underground community.” Thompson was slight of build with a full red beard. He dressed in khaki, and his menu was structured around a typical Mexican working man’s diet. Beer in hand, he would rail at length against the evils of plastics and the modern world; he was a regular at Ramon’s bar on the north side of the plaza, the focal point of Jocotepec social life at the time. 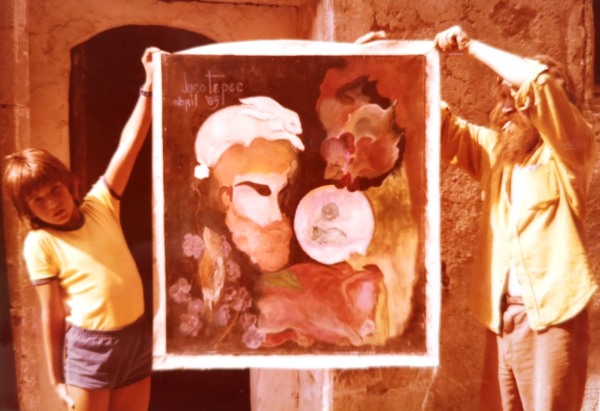 Gayle Thompson was a 17-year-old student at the six-week University of Arizona summer school in Guadalajara when she first met Thompson through a mutual friend, Marilyn Hodges. Hodges was opening an art gallery in Guadalajara and offered Thompson free room and board if he helped paint and decorate the building (8 de Julio #878). Among the prominent Lakeside artists who held solo exhibits at the 8 de Julio gallery during its short lifespan were John Frost, Tom Brudenell, Joe Vines, Peter Huf, Eunice Hunt, Robert Neathery and Georg Rauch.

Gayle’s enrollment in summer school was her pretext for having a full year in Mexico. Having a Mexican boyfriend, she rebuffed Thompson’s initial advances. The charismatic, intelligent and stubborn Thompson, however, was persistent and determined. When Gayle returned to the US, preparing to enter college in New York, Thompson left his belongings in Mexico and hastened north in pursuit. He traveled north in the company of Dave Bennett, another Jocotepec resident, who, coincidentally, was from Monterey, California, and knew Gayle’s parents. Gayle again spurned his advances, so Thompson retreated to Mexico. But he reappeared again a few months later and this time, finally, Gayle conceded defeat. 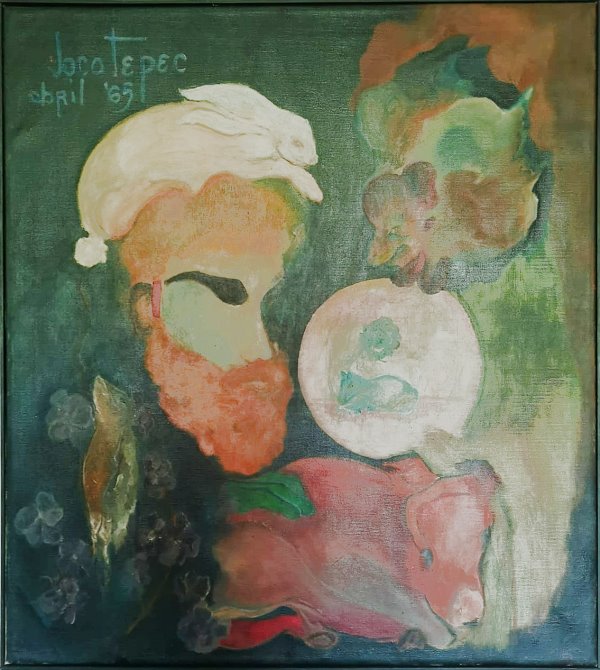 Resistance overcome, Thompson still had the problem of getting all his paintings and possessions back from Mexico. Bennett stepped in and persuaded Thompson to buy and convert an old school bus for this mission. The school bus made two trips to Mexico before being rear-ended somewhere in the US and written off.

After John and Gayle married, they lived for five years on the coast of Croatia (then known as Yugoslavia), and another decade in Europe, before they returned to the US. During this time Thompson was able to visit his old friends, Peter Paul Huf and his wife, Eunice Hunt, at their home in Bavaria, southern Germany.

Thompson was a self-taught artist. Tom Brudenell, who met Thompson in the late 1960s, told me that Thompson’s local artistic patron at Lake Chapala had been Marian Powell, a wealthy American who owned a lakefront home in Ajijic. Gayle Thompson told me how Powell would sometimes lend John her huge Cadillac, but that she (Gayle) felt overly conspicuous and self-conscious whenever he took her for a drive.

As for Thompson’s art, Joan Frost considered that Thompson “promoted himself as a painter of the Miro school. His works were colorful with lots of mysterious figures floating about in the air above towns like Joco.” [1] 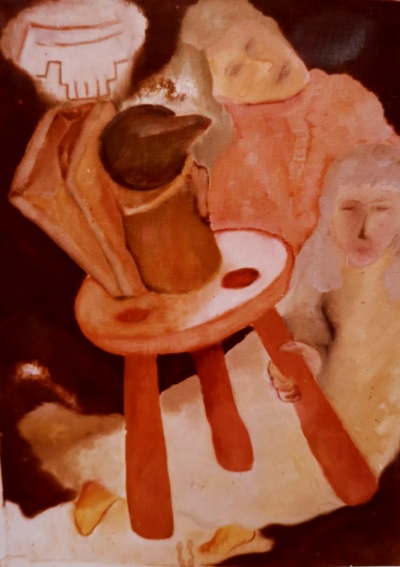 However, as Gayle explained to me, and judging by those paintings that have survived (while living in France the artist built a bonfire and destroyed most of his work), his paintings were far more akin to Chagall than Miro. The paintings are darker in tone and subject matter than those of Chagall, more brooding, with elements of the macabre and surrealism.

Thompson was never very enthusiastic about holding exhibitions, believing that artists did what they did out of a sense of purpose not financial needs, just as those who held down regular jobs did so out of necessity not enjoyment.

The only solo show he is known to have held while in Mexico was a two-week show at Posada Ajijic in the summer of 1965. He was in illustrious company. The three other artists exhibiting there that summer were Charles Littler (who exhibited widely and taught at the University of Arizona), Dick Poole (professor of art in Pasadena), and the Black American Beat artist Arthur Monroe. [2]

This is a greatly revised version of a post first published 6 August 2015. My heartfelt thanks to Gayle Thompson for sharing details of her former husband’s life and photos of his work. Images reproduced courtesy of Gayle Thompson and Andreas Wellenhoffer.