Painter, jeweler, and accessory designer Hubert Pickering Harmon Jr. (1913-2004) was born into a wealthy family in Evanston, Illinois, on 23 October 1913. The family home was in the Highland Park district and the whole family spent time in Europe even during Harmon’s childhood.

After high school, Harmon chose to study design at the Parsons School of Design in Paris. He lived in Europe, with regular holiday trips back to New York, from 1934 to about 1939, when he returned to the US before the outbreak of World War II.

On 2 January 1940, Harmon married a fellow artist, Louise Katharine (De Mocher) Frazier, who was eleven years his senior, in Greenwich, Connecticut. The marriage to Louise, a divorcée, appears to have been largely one of convenience, given that, according to those who knew him, Harmon was openly gay. Louise was born in 1901 and graduated from East High School in Rochester, New York, in the class of 1919, before attending Columbia University, where, part of her yearbook entry read,

The newly weds made their home at 51 East 51st Street in New York City, but planned to return to Paris after the war. They regularly traveled overseas. Within weeks of marrying, they traveled to the Caribbean, they returned to New York in May 1940 for a quick visit before heading for Hawaii, where they stayed several months.

Edgar Rice Burroughs, in a letter from Hawaii in January 1941, wrote:

“Have met a young couple at the Niumalu who drop in for Contract [Bridge] or conversation quite often – Louise and Hubert Harmon. He has spent much of his life in France and England and consorted with royalty, nobility, and aristocracy; so he is very interesting. He is so well connected that he had the entree to the palaces, castles, and chateaux of many interesting people.”

Late in 1941 or early the following year, Harmon and his wife moved to Mexico to pursue their artistic careers. Harmon and his high-society wife breezed into Taxco in 1942, with more than two dozen items of luggage and accompanied by their two brown standard poodles.

Harmon worked briefly in jewelry design in Taxco before moving to Mexico City, following an incident involving a gun in a bar. He continued to visit Taxco regularly for several years in order to oversee his designs, mostly of silver jewelry but also of copper or brass accessories. His silver designs are often described as “whimsical” and are much sought after by collectors. His silver pieces include feet, angels and dogs (especially poodles) as well as stars, mermaids and dolphins. Harmon is recognized today as one of the several outstanding designers who contributed to the popularity (and success) of Mexican silverworking. 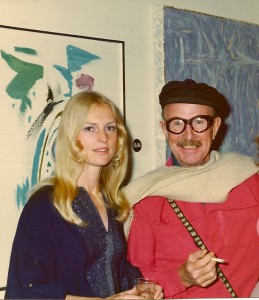 Harmon’s designs were worn not only by his wife but also by such illustrious stars as Hollywood glamor icon Dolores del Rio (whose Great Dane sported matching Harmon-designed accessories).

In the early 1950s Harmon and his wife enjoyed a playboy lifestyle jetting between Europe and North America. Harmon established design studios in various cities as his wanderlust carried him in search of artistic inspiration. Despite leaving New York in January 1949 with the avowed intention of planning to stay abroad indefinitely, Harmon and Louise returned to the US from a spell in Cannes twenty months later in October 1950. They left again in 1953, planning to spend the next two years abroad.

Harmon was definitely painting during much of this time, as shown by plans for a December 1951 showing of his paintings of poodles in a New York City gallery, and an account of him spending six months painting every day in Rome “on his way back to America.” (Arizona Republic (Phoenix), 11 Dec 1957, 28)

In the 1950s, a Mexico City jewelry firm, Casa Maya, produced less expensive copies for the tourist market of many of Harmon’s original designs, using brass and copper in place of silver and precious stones.

After his wife died in 1970, Harmon moved to Ajijic. By the early 1970s, he was a bright light on the Ajijic social scene and active in the local art community. He was a founding member of the Clique Ajijic art group that arranged group exhibitions in several cities in Mexico for 3 or 4 years in the mid 1970s. The group also included Tom Faloon, Synnove (Shaffer) Pettersen, Todd (“Rocky”) Karns, Gail Michaels, Sidney (“Sid”) Schwartzman, John K. Peterson and Adolfo Riestra.

A Clique Ajijic exhibition in Guadalajara at the Galería OM was reviewed by Martha Fregoso, who described Harmon as having gained international fame as a designer of fashion, jewelry, and paintings, by working with fashion designers such as Christian Dior, Shiaparelli and Tina Lessa, and designing jewelry for Paul Flato and Bronzini. The list of those who had acquired Harmon’s works included King Carol of Rumania, Dolores del Rio and Edgar Rice Burroughs. According to Fregoso, his paintings showed some influence from the classes he had taken with Diego Rivera and Rodriguez Lozana.

Some of Harmon’s paintings in the early 1970s were overtly homoerotic; others were amusing, revealing a keen sense of humor and fun. Synnove Pettersen, a fellow member of Clique Ajijic, remembers Harmon as a “very sensitive, somewhat flamboyant” man who was an elegant dresser and loved to have parties.

Tragically, in the 1990s a fraudster tricked Harmon out of his valuable personal collection of silver and he lived the last few years of his life in extreme poverty in an old folks’ home in Chapala. Harmon died destitute on 1 February 2004 at the age of 90.

[Note: This is an updated and expanded version of an article originally published on 22 March 2012.]