American couple Jim and Gloria Marthai took early retirement and moved to Ajijic in 1969. After 5 years there, they opted out of its bright lights in favor of the small village of San Pedro Tesistán on the south side of the lake. Very very few foreign residents have chosen to live in San Pedro; the Marthais lived there 15 years, enjoying the simple life and rural surroundings. Gloria, a keen rider, made regular forays on her horse to nearby villages and to the higher elevations behind their home, including the summit of the volcanic peak Cerro García, the highest point around the lake.

The Marthais’ lifestyle and willingness to learn Spanish enabled them to take an active part in village life and they quickly gained friends and became well integrated into their adopted community.

The couple later moved to the Roca Azul subdivision on the outskirts of Jocotepec.

James Louis Marthai (born in New York City on 22 November 1918) had first met Gloria (born in Canton, Ohio, on 7 September 1928) in California, where they both worked for General Dynamics Corporation, and married in Nevada on 28 June 1958.

The Marthais spent the first six years of their early retirement cruising the Bahamas and the U.S. east coast aboard their private 43-foot classic Elko cruiser.

After returning to live on land in Mexico in 1969, Jim Marthai developed his skills in poetry, sculpture, ivory carving and jewelry design.

He read some of his original poems at a Sunday evening of music and poetry held in 1971 at the home of Aileen Melby, a poet and children’s author, and her husband, Arthur. Jules Rubinstein and Katie Ingram also read poems at that informal soirée. 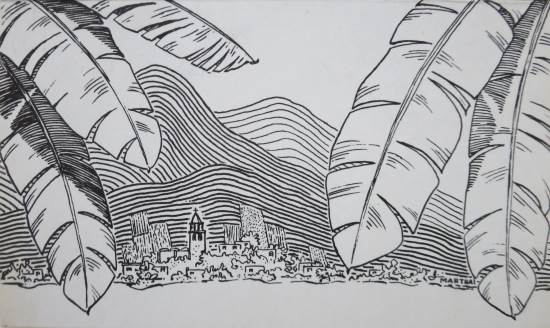 Jim was an accomplished sculptor, carver-especially of miniatures-and jeweler, using raw materials that varied from ebony and bone to walrus tusks and precious metals. He also made one-of-a-kind hunting knives.

Gloria immersed herself in Mexico and her experiences were the basis for a series of stories written for Mexconnect, El Ojo del Lago and the Lake Chapala Review. She contributed several pieces to Aguas Marías: Border Crossers, Boundary Breakers, a compilation of writings by 10 American and Canadian women living at Lake Chapala. Her one-paragraph bio in that book summed up her motivation to write:

“When I came to Mexico in 1969, I entered a time warp. It was the United States 100 years ago, a land of the horse. I was, and still am, intrigued and inspired by this country. I studied Spanish and bought my first horse early on, which led to easy assimilation into rural village life and an endless trail of adventure. How could I not write about it? Besides, I like tequila.”

In addition, she made made artistic shirts, mosaics and unusual decorative mobiles, frequently using bone and recycled materials.

In 1977, Jim Marthai’s drawing of a village scene (image) was used for the Amigos de Salud charity cards, available in either color or black and white. That same year Marthai illustrated The Before and After Dinner Cookbook, written by two Lakeside residents, Charlotte McNamara and Lenore Howell.

In a strange twist of horsehair, Jim Marthai’s legacy still lives on in the small town of Cajititlán, mid-way between Chapala and Guadalajara, where several families make hand-woven belts, sashes and bands for charro hats from long strands of horsehair. It was Marthai who first taught the techniques to a local woman, Consuelo Cervantes, and her son Diego in the early 1980s. She has since taught others. The unusual and ingenious handicrafts are sold at rodeos and charro events.

My thanks to Phyllis Rauch for sharing her fond memories of Jim and Gloria Marthai.

Lothar Wuerslin and his wife, Ann, lived in Ajijic in the late 1950s, from 1956 to about 1959. They stayed until their savings ran out and then returned to New York.

Their time at Lake Chapala changed their lives in more ways than one. First, their eldest son, Christopher (who late in his life became a chef, writer and photographer) was born in Mexico on 21 March 1956. Then, Lothar, who had been busy preparing enough paintings for a solo show on his return to New York, discovered sculpting. Thus began an entirely new chapter in his artistic career. Ann was also an artist, as well as a poet.

Lothar Hellmut Wuerslin was born in Auggen, Germany, on 3 March 1927 to a French father and his German wife. Before Lothar’s third birthday, the family emigrated to the U.S. (1929). He served in the U.S. Army from July 1945 to November 1946. In 1951 he entered the University of New Hampshire to study art, and met Ann. Lothar also studied at the Boston Museum school of art. The young couple moved to New York where a succession of part-time jobs (including painting fire escapes) enabled them to save a few dollars and try their luck in Mexico. 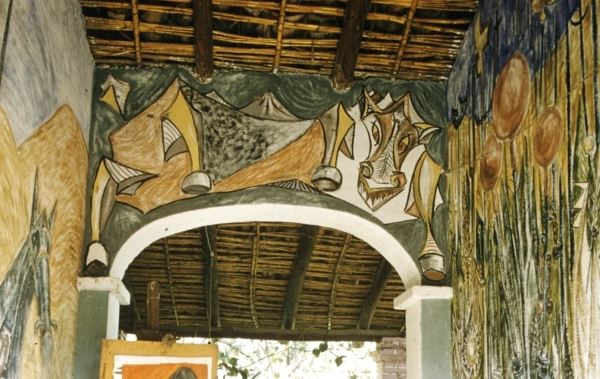 In 1956, they took up residence in Ajijic, paying the princely sum of $5 (dollars) a month for a 4-room adobe house that lacked a tub. Within months, Lothar had executed an interesting series of frescoes on the foyer walls (above) as well as begun to paint in earnest. 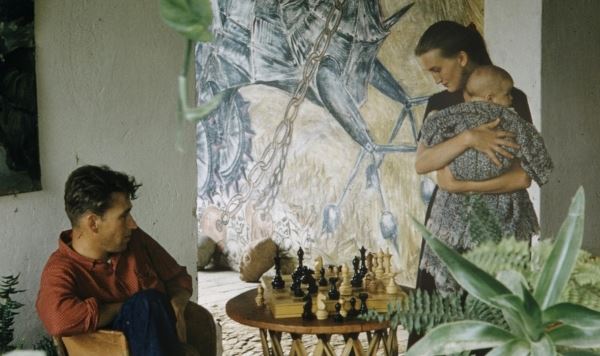 The Wuerslins were photographed by Leonard McCombe for his 1957 Life article about Americans at Lake Chapala. McCombe not only photographed their home (and murals), but also took pictures of the young couple playing chess and (their home lacking a tub) taking a bath, surrounded by flowering water hyacinths, in Lake Chapala. 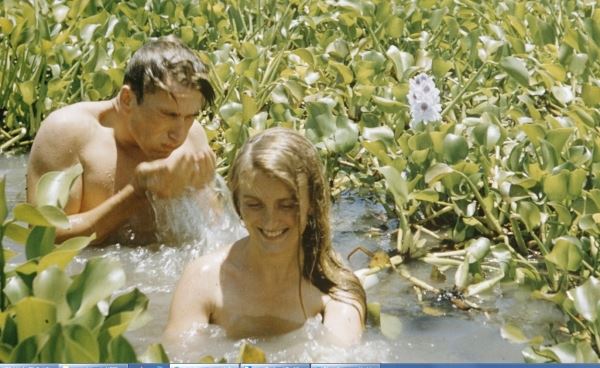 Years later, this is how a local Vermont newspaper described how Mexico and Ajijic had changed the direction of Lothar’s art for ever:

“A chilly night in Ajijic, Mexico, changed artist-painter Lothar Wuerslin’s life. … Once a painter, Wuerslin switched arts when he was given some firewood on a chilly evening in Mexico where he and his wife had gone in 1956. He had by this time painted murals on most of the adobe walls of their small rented house. He picked up a piece of the redwood and began carving it.” – (Bennington Banner, 24 July 1965)

In about 1959, the Wuerslins moved back to New York. By April 1960, they were sufficiently well established there for Lothar to have already held an exhibition of his paintings on Madison Avenue and to be renting a loft studio on the Lower East Side to continue his new-found love: sculpting. About a year later, their second son, Hasso, was born. In 1963, the Wuerslins moved to a farmhouse in Sandgate, Vermont, where Lothar could have a larger studio and more room to develop his sculptures. Their third son, Tristan, was born in Vermont in May 1965. The Wuerslins also had a daughter, Joan, the eldest of their four children, who had been given up for adoption. 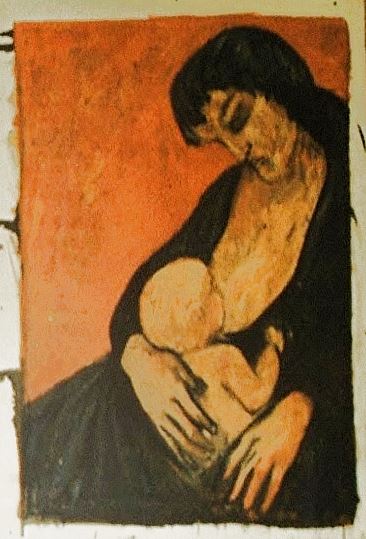 Lothar exhibited in local shows in Manchester and Bennington and examples of his work (in wood and cast cement) were included in a 1967 collective exhibition of Vermont Artists. In February 2005, both Lothar (by then deceased) and Ann were represented in an exhibition of Sandgate artists at The Canfield Gallery.

Several younger Vermont artists, including Anna Dribble and Chris Miller, took community college classes with Lothar and have paid public tribute to his influence on their art.

Lothar’s wife, Ann “Bunny” Wuerslin was born in New Hampshire on 14 October 1930 and died in Sandgate in 2009. She had been the town clerk of Sandgate for 13 years prior to her retirement in 2008.

In addition to her art, Ann Wuerslin wrote poetry and was, after 1967, designed and made jewelry, sold not only locally, but also in “Primitive Artisans” on 5th Avenue in New York City.

Late in life, Ann became a published author with a book called In the Child’s Voice (Shire Press, 2008). The book is a poignant and expressive memoir, comprised of vignettes about living in a succession of foster homes in New Hampshire during her childhood.

To listen to Ann Wuerslin reciting one of her own poems (later used in her obituary notice), see this YouTube video clip. The poem starts at minute 2:00 of the video.