It’s not often that obstetrics makes it into my random musings about the artists and authors associated with Lake Chapala. But there’s a first time for everything! Starting in the 1960s, Carol Shepherd McClain, a young California researcher, visited Ajijic several times in order to investigate “traditional” birthing practices in the village. 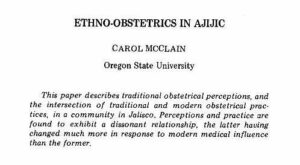 McClain’s supervisor at University of California, Los Angeles (UCLA), suggested she undertake research in Guadalajara and/or Lake Chapala. When McClain visited Ajijic in 1965, she knew she had found an ideal place for her work.

In September 1965 the Guadalajara Reporter noted that McClain was visiting Ajijic to gather material for a PhD. Accompanying her during that first visit to Ajijic was her older brother, Spencer Owen Shepherd, who was said to be “adding the finishing touches to a book he wrote in Spain.”

A follow-up in the Guadalajara Reporter in November reminded readers that McClain still hoped that more questionnaires would be returned. Failing to collect sufficient data, McClain was forced to abandon her initial idea of a community study. Instead, on an extended return visit to Ajijic (January 1967 to June 1968) she gathered information for her PhD in Cultural Anthropology (awarded in 1975), which was entitled “Systems of medical beliefs and practices in a West Mexican community.” One of her major findings was that “Ajijicans were more than willing to incorporate modern medical practices as they could easily see that many were effective (e.g. surgery, antibiotics) but that they retained very traditional beliefs about the causes of illness (e.g. witchcraft, fright).”

McClain spent another two months of field work at Lake Chapala from August to September 1973, collecting additional data for an academic article focused specifically on childbirth and midwifery. Published in 1975, when McClain was working at Oregon State University, her ethno-obstetrics research paper looked at the indigenous or “traditional” forms of “obstetrical perceptions” and “the intersection of traditional and modern obstetrical practices,” including the roles played by mothers, grandmothers, curanderas (native healers), parteras (midwives) and espiritistas (spiritualists).

In addition to informal conversations, Carol McClain interviewed 41 mothers at some length about their beliefs and practices, and spent time getting to know four of the local parteras. Doña Carmen was “a popular curandera” who had studied under a hierbero (herbalist) for five years and had “traveled as far as Mexico City to bring patients back to Ajijic for extended treatment.” Her daughter, Josefina, had first become a partera at the age of 25. Doña Josefa, born in Ajijic in 1904, worked both as a partera and as a curandera; she had retired by the time of Shepherd’s second field visit. Doña Petra, born in San Juan Cosalá in 1900, had begun practicing as a partera in 1920 and had spent nine months working under a doctor in Guadalajara; she was the most “modern” (and expensive) of the four.

And what did McClain find out during her research into ethno-obstetrics in Ajijic?

Among other things, that local women believed that four “external factors” affected the fetus: food taboos, sibling jealousy, eclipses of the sun and the moon, and a father who drinks to excess. In the case of food taboos, it was widely believed that “cold” foods might cause illness in the newborn child. McClain quite rightly traced the belief in the potential impact of eclipses back to pre-Conquest times. In Ajijic, it was believed that, “a lunar eclipse will cause an excess of parts, such as fingers or toes, while a solar eclipse will cause incomplete development, and parts of the body which may be affected, such as the nose or the ears, are “eaten by the sun”…. Women who are pregnant will wear a metal object such as a safety pin beneath their clothing to absorb the effects of an eclipse. For protection at night a metal object will be placed beneath the bed.”

McClain’s conclusion was that “Whatever advantages traditional obstetrical care offers women and their children in Ajijic (and these may be considerable), they will be lost if it is completely displaced by modern hospital services. A partial compromise may be the alternative method of home delivery under the care of a physician.”

Other academic papers authored by Carol Shepherd McClain include “Adaptation in health behavior in a west Mexican pueblo,” published in Social Science and Medicine (1977); “Women’s choice of home or hospital birth” in Journal of Family Practice (1981); “Traditional midwives and family planning” in Medical Anthropology (1981); “Social network differences between women choosing home and hospital birth” in Human Organization (1987); “A new look at an old disease: smallpox and biotechnology” in Perspectives in Biology  and Medicine (1995); and “Family Stories: Black/White Marriage During the 1960s,” published in the Journal of Black Studies (2011). Shepherd was also the editor of the book Women as Healers: Cross-Cultural Perspectives, published by Rutgers University Press in 1989.

McClain has returned to Ajijic several times in the past twenty years and has conducted additional, less formally structured, research into folk medicine beliefs and practices. This was the basis for a paper she presented at the 2012 meeting of the American Anthropological Association in San Francisco entitled “The Persistence of Traditional Medicine: A Mexican Case Study.”

Other artists and authors who connect Berkeley/Oakland to Lake Chapala include: